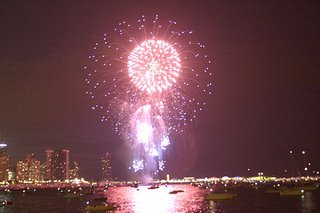 Whoopee! Return of the Guardian King is done!

My fifth book, in the can. Wonder of wonders!

Sort of in the can, anyway... I still have two three-chapter sections to go through and develop/smooth out, and about 5 or 6 chapters at the end to work through (editing, tweaking, bringing details into line with things I've changed) but I can send those in as I finish them.

Yesterday I had even more left to do, but had decided just to send the thing in as it was... only to learn that the guy who processes the e-copies into hard copies for the editor was off to work the election. So I kept it another day, worked through one of those three-chapter sections and made significant headway before sending it off today. Even though I still have work to do on it, it still feels like a huge load off.

The deadline factor is oppressive, to say the least, and the last few days left me despairing. Some of the problems were large and complicated, the kind that require several days to mull over and sort through and I didn't have several days. And by the time you get to the end of a book as long as mine are, you're just sick of your own words. Especially when you're having to write fast. You begin to notice all the times you're saying the same things, the fixation you have with particular words, and you start chiding yourself: "Can't you think of anything else for them to do besides "look" at one another?!" I think that's why I like editing the best: I can cut most of that stuff out or replace it with better. I get positively on fire when I start editing. Just love it.

Anyway, there are more days now, so it's all working out just fine. As the Lord knew, but I was too often doubting. In spite of all the times He's come through. What can I say? I'm dust.

I can say, though, that I have the most wonderful editor alive! She is amazingly patient and so encouraging.

Anyway, I thought I'd take the afternoon off. Maybe clean the house a bit, do some ironing, write in my journal, take a walk, post a blog entry -- all the things I've not been doing lately. It feels like I've been in a long, dark tunnel for some time now and have finally emerged -- only to realize that I lost my dog in that tunnel. Kind of a strange feeling.

The other weird thing is that ... I can't believe I'm saying this... part of me also wants to go back and start looking at those chapters I still need to fix. Talk about obsessive! You know how they say dogs are like their owners? Or owners are like their dogs? Well, that's why the hound is the perfect dog for me. Get them on scent -- or focused on anything else they care about -- and they will NOT leave it alone!

Tomorrow, though, I'm off to another Bible conference, this one in CA. Looks like we'll be having a car caravan heading over there, which will be a blast.

I'll be back Monday and finally regular on posting again. Thanks for all the prayers!

Posted by Karen Hancock at 1:14 PM