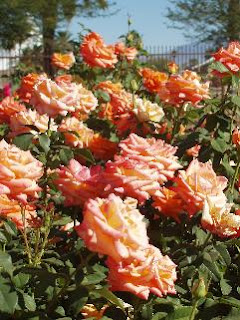 Another photo from the Rose Garden on Thanksgiving Day.

Well, I've been unexpectedly quiet, because I'm slogging along through the last couple of miles of this writing marathon I inadvertantly got involved in. I remember when my husband ran Boston last spring, my son and I went down to cheer him on at the end and he neither saw us nor heard us... too focused on just getting to the end.

I sort of feel like that right now. Just getting to the end. Bible class has been on thought testing and mental attitude and how there will be people, things, fiery darts sent in to screw it up. I've experienced it. For one thing, we've had four social engagements in the last week. Dinner parties and the like. We never go to dinner parties, and granted it's the holiday season, but it's not even December yet! Anyway, I thought it was funny.

I also stupidly googled my name late Wednesday night, just to see what would come up (I never do that; I know better than to do that), promising myself I would read no reviews... and ended up doing it anyway. Whoa! Did I get a boatload of fiery darts from that mistake. The reviewer didn't seem to think I'd done much of anything right in my books, and, in fact, spent the bulk of the words in the piece discussing all the things I'd done wrong, or at least not according to the reviewer's standards. Fortunately, immediately thereafter I did Bible class, which brought up the aforementioned fiery darts sent to destroy your mental attitude, and the part that zinged me was,

"'Let no corrupt communication proceed out of your mouth, but only that which ministers grace to the hearer.' When's the last time you listened to some corrupt communication out of someone's mouth that didn't minister grace to you? It ministered judging to you. It ministered negativity to you. It ministered insecurity to you. Why? Because you listened to the garbage. You did it to yourself. You disobeyed God's commands to be careful what you listen to and how you listen and you said yes to the kingdom of darkness: 'Oh, do you have some more hits for me so as to corrupt my mental attitude?'"

Exactly what happened. All those things -- judging, negativity, insecurity -- were ministered to me. Even after that class, the next day when I had to keep on slogging through the book, the words from the review kept plaguing me until finally I just stopped, looked at it all and said, "Okay, yes, I'm a hack. I can't write. My secondary characters are poorly developed, my worldbuilding stinks, my dialog is mediocre, my characters don't seem real, I preach at unbelievers, and really, I'm just a hack. Fine. God uses the foolish to shame the wise, and even being a hack, even not having everything be wonderfully wrought and exquisitely rendered and blah, blah, He can still use what I do. He called me to do it, and gave me whatever hackish sort of gift I have, and so... who cares if that's what I am? I am what I am by the grace of God. Besides, I like what I do and there are others who like it, too. So, what's the big deal then? I think I'm actually quite comfortable with being a hack because then you have nothing to live up to!

Anyway, after that, well, I was still plagued with the negative voices, but I just kept on writing. Doesn't matter, you negative, accusing voices. You can accuse all day long. I know I'm not a terribly good writer, so it doesn't matter. God will use it anyway!

As of tonight I've sent in to my editor the weekend's worth of work: chapters 34, 36 and 37 (having already sent 35 last week). All that remains to go through are 38 and 39, then 40 to write. Maybe I'll get that done tomorrow. But even if not, I think the finish line is near.