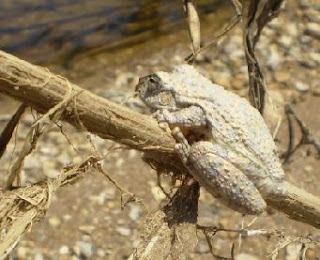 Time for a picture.

This is a shot of a canyon tree frog taken by a friend of mine on her travels through the riparian areas of our desert. I think he's pretty cute.

Well, it was a busy weekend, and promises to be a busy week with doctor's appointments, rehab appointments, birthday celebrations, and Thanksgiving already looming in the near future. We're going to use a wild turkey this year; the one that's already in our freezer. Should be interesting.

We have just discovered the return of the termites -- they build little exploratory mud tubes down from the ceiling in the living and dining rooms. Last night (after I'd just finished decluttering the bed in the office/bedroom) we had to take everything out of the closet and put it on the bed so my hubby could climb (literally) up into the attic and see what was going on. He replaced some boards, but still needs to treat the area with termaticide, so the stuff is staying on the bed for now. But! I am using this opportunity to start decluttering the closet.

One of Flylady's sayings is "Progress, not perfection." I'm adopting it in my cleaning (whatever I do, it's cleaner than it was if I'd done nothing) and also in my writing. It's a nice little mantra to head off the, "But I don't know if this is the best/perfect way to do this scene." Instead, I just plow ahead, shoehorning the stuff in as I can and moving forward. I'm on chapter 9 now, having redone parts of 4 and 8. I had thought last week that I would be radically changing the second scene of ch 9, but now I think I'm going to leave the flow of events more or less as they are, and tweak them a bit. That's for tomorrow.

Have a great day
Karen
Posted by Karen Hancock at 9:43 PM