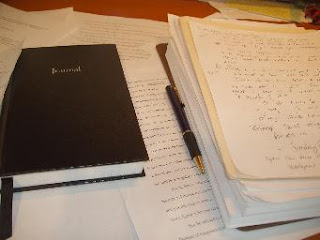 From my nonstop as a part of today's writing efforts:

"I’m swimming around. I’m tumbling along in a washing machine. I don’t know what I’m doing. But from reading my previous writing journals this is common. This is usual, actually. I just did a provisional sketch of a scene I feel needs to be here, but… I don’t know how to integrate it. So right now it’s just there.

"One of the things that seems to be happening is that I write something in a sequence and then start breaking it up, inserting new parts, moving sections of the original further and further back.

"I’m kind of going through the scene and sequel cards I had made up and they seem to be fitting, sort of. I also have a list of plot events I want, but when I look at those I am dismayed because I’ve only managed to get two of them into the story so far. But maybe most of them occur at the story's end. And right now this story's end is far more in place that its soggy, wandery middle.

"I have lots of partial scenes and scraps. Do they go together or not? Aack! Why can't I decide?

"There is no need to freak out and get all agitated. God has everything under control. This is like putting together a jigsaw puzzle and all the pieces are here. Yes, there are parts of other puzzles mixed in, but eventually all of it will be sorted out and this picture come together. I know that is the case because God is behind it. God knows. I don’t. So I’ll just keep plugging. One word at a time. That’s really what it is, too. One word at a time."

But I am progressing, working on Chapter 17 now (and you might recall that at my last report I was on ch 14), with some of it already pulled out and held for chapter 18. I have too much plot, but that's standard for me. I read my journal entry for two years ago when I was working on RotGK and I was saying the same things. Too much plot. No direction. Elements floating around with no clear place to go.

Today I thought that perhaps having Quigley as a distraction isn't really going to make all that much difference since even if I was focusing all my attention on the book for eight hours a day, I still wouldn't have gotten any further.

Another analogy is that it's like I'm watching a darkened stage, waiting for the players and scenery to emerge from the draperies. So far nothing has emerged, though I hear snatches of conversations, rumblings and rustlings. Still, after awhile staring at the empty stage gets boring and I lose interest and so go off to something more entertaining. Which today, was play with Quigley (who was very good).

So today was a thinking and simmering day. And tomorrow? Who knows!