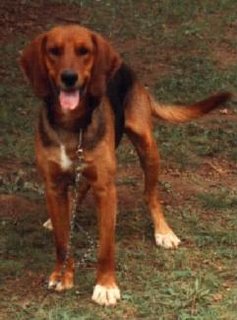 This is our first hound, Grumpy, a black and tan/bloodhound cross. He's two years old in this picture and in his later years was the model for Trap's dog Newbold in The Light of Eidon. I've used Bear as a model too, but only an unpublished short story I've written called Fairy Toads.

Grumpy was as much a character as Bear. He used to pull the socks off the clothesline when no one was looking. And if I waited in hiding for him to do it again so I could catch him in the act, he would wait until I left. Then pull them off.

We lived in an apple orchard at the time, and in the fall people would come to buy apples. He seemed to have a thing for scaring little old ladies who came up the walk. He didn't bark at them, he'd just quietly come up, the mild mannered hound, circle gradually around behind them and then, when they thought he was long gone, stick his nose in their, um, posterior. Upon which they would jump and shriek and turn and he would back away and bay. Okay, I know, you're not supposed to laugh. But it was funny. Especially when he kept doing it to new and unsuspecting victims!

Another time a lady came for apples and went with me off to pick a bunch for her from one of the trees. When we came back to the porch where she had left her purse, it was gone. She looked all around. Where was her purse?! She had set it right there and now it was gone! I suggested perhaps she'd brought it out the tree, but investigation proved otherwise. Then I thought, Where's Grumpy?

Sure enough he was out in the back of the orchard with the purse, which he'd taken off the porch. Somehow he'd dumped it out and was lying there in the tall grass, its contents spread around him. Why? I have no idea. But he did it more than once. Probably the smells were just more than he could bear to leave alone. Really, I assured the lady, we did not teach him to do this!