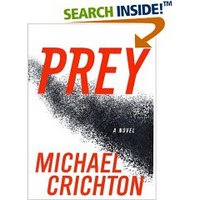 Prey
Michael Crichton
Harper Collins 2002
From the inside cover:

"In the Nevada desert, an experiment has gone horribly wrong. A cloud of nano-particles -- microrobots -- has escaped from the laboratory. This cloud is self-sustaining and self-reproducing. It is intelligent and learns from experience. For all practical purposes, it is alive. It has been programmed as a predator. It is evolving swiftly, becoming more deadly with each passing hour. Every attempt to destroy it has failed. And we are the prey.

Drawing on up-to-the-minute scientific fact, Prey takes us into the emerging realms of nanotechnology and artificial distributed intelligence -- in a story of breathtaking suspense."

As I said yesterday, I enjoyed this book. It was a fast read, heavy on concept and plot, light on characterization and setting. Not surprisingly there was quite a bit of exposition on artificial distributed intelligence/computer programming and evolution. What intrigued me, I guess, were the concepts of evolution as applied here. I don't believe there's much empirical or rational justification for the notion of species evolving into other species, and even when they use the term for viruses, "evolve" seems a misnomer. It's not like viruses are turning into cats or even into bacteria. They remain viruses and merely have different effects on the organisms they invade. However, reading this book it occurred to me that perhaps one place where evolution might truly apply is in the area of thought.

Now I'll freely admit that I don't know much at all about computer programs, and I hardly feel that reading this book has done much to change that. But it seemed to me that he was talking about something that was originally programmed to do a certain thing, including innovate in the attempt to achieve its goals, but because it was self-organizing and self-reproducing, at some point it went beyond the original program and began to program itself. With each successive generation the swarm upgraded its appearance and mode of operation to an increasing level of sophistication and complexity.

Computer programs are systems of commands, assumptions and instructions, some of which can, as a result of outside stimuli, "evolve." Or at least that was the impression Prey gave me. As such it struck me as an excellent metaphor for the system of false thinking with which Satan has deceived the world.

Likewise, the worldly thought system contains commands, assumptions and instructions. With each new truth that God reveals, it shifts and adapts, reorganizing itself to a greater level of complexity, subtlety and sophistication. You can see this over time in the history of ideas, particularly religious/theological concepts (among which I consider evolution itself). Science, as I mentioned in an earlier post, is constantly changing its view of what is true. Ditto Psychology. Education. Medicine. Today, philosophies and various religious viewpoints abound, the result of a constant shifting of perspectives and priorities, the acquisition of "new" information, and the changing view of what truth is and how it can be perceived.

All of which is quite interesting when you consider the Bible says there is an agent at work, a grand creature of great genius who is said to be the prince of the power of the air and the ruler of the world. One who has schemes and plans to continue in his deceptions, evolving them as old concepts prove false and new truths emerge for him to combat. In some cases he brings back old ideas in more complex forms -- gnosticism, for example. Environmentalism. The old phallic cult of ancient times (and if you don't think that isn't present, even rampant in our sex-crazed society of today...better think again. You don't have to have a temple or a grove to worship something.) And the evolution is the result of what he does relative to what God does.

When you step back and think about it, the magnitude of falsehood and deception is immense. Mind-boggling. And apart from knowing God's word, we have no hope at all of escaping deception. Even knowing it, we are at risk because some of Satan's greatest lies -- some of his best work -- relate to the Bible and Christians. Satan knows the word of God, after all. He tempted Jesus with it in the desert. He presents himself as an angel of light; his ministers come to us claiming to teach us how to be righteous. He has another Jesus, another Gospel, another communion table... And just like the swarm in Prey, his lies are constantly shifting form, adapting, attacking, imitating truth and seeking a way to live symbiotically with it. Which, of course, is ultimately impossible.

Grace,
Karen
Posted by Karen Hancock at 9:37 AM