The Puppy We Wanted

It's been awhile since I said anything about Quigley. How's he doing? He's improved A LOT. In fact, since the weekend when I truly gave it over to God, and quit thinking this was something I had to figure out and do right, much has changed. My husband said after the first week that he thought we'd finally gotten the puppy we wanted rather than the tasmanian devil doggie we got. (Sorry, Aussie Fletchers, but really, it fits.) He still wants to bite things, and he goes through phases where he gets REALLY excited and falls into shark mode -- or is it tassie devil mode? -- his ga 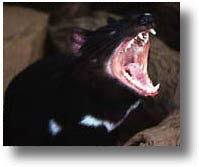 ping mouth darting wildly back and forth... Here is a picture of a real tasmanian devil and its mouth looks just like Quigley's! Except it's still, of course.

But he's controlling himself more and more. Many times he confines himself to licks rather than the teeth.

For the most part he does fine in the crate, and we've started taking him on evening walks. Stu holds the leash, because we haven't yet taught him not to pull on it as he forges ahead. Though as the walk progresses he does that less and less. I've taught him to sit, lie down, stay (30 seconds is his tops) come and most recently, shake.

He's still absolutely horrid when people come over. He goes completely bananas, dribbles pee in his excitement and throws himself at the end of the leash if he's on one (or against the fence or barrier if he's behind one), trying to get at the person. Stu and I are using the knee trick when he hurls himself at us, but you have to get the timing right because he does it fast and hard, and guests can't be expected to have to do that. From there he goes into the flying mouth stage, and eventually, if the person stays long enough, calms down enough they can pet him.

I've been hiding treats for him to find in the yard and throwing the ball for him daily, plus bringing him into the house midday to give him practice lying on his bed quietly or with a chew rather than attacking and humping it. (I put away the new fleece bed, and brought out an old, but still in good shape twill bed and that seems to work better)

I have no new wounds today, and have had very few for a couple of weeks. Those I have sustained, I got when I was doing weird things with him -- throwing a ball, working with the grooming glove (which for some reason he is convinced he must attack and bite), etc. So, overall things are settling down. But he is still a huge distraction to my simply focusing on writing Black Box... er... The Enclave...

He is, as my husband says, "a whole lot of dog." I found an article on redbone coonhounds on Wikipedia that agreed. It said redbones "are very affectionate, but can be overwhelming to small children or even adults if not properly trained." Also, "young coonhounds are energetic (ROTFL) and need lots of activity, or they will become destructive. This can lead to acting out in the form of chewing and baying. They take a longer time to train than some other breeds, because they mature more slowly both physically and mentally."

"Like many hunting dogs, they have an independent intelligence especially well suited for problem solving. This can be an issue if the problem they want to solve is their backyard fence or the dog-proof garbage."

And finally, "They are all loud, loud barkers."

Oh, amen to that. Now that we have Quigley I think I might have to attribute some of my hearing loss to living with Bear. And Quigley's not helping. And to think I worried about having a silent coonhound. If you want to read more about the breed, the link to the article is HERE.