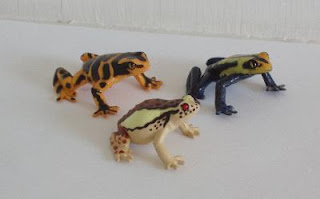 How weird. This is how The Enclave begins:

Cameron Reinhardt is an idiot!

Yes, he had a PhD from Stanford. Yes, he was widely acknowledged as a brilliant geneticist. Yes, Doctor Swain called him the field’s newest rising star, the Institute’s greatest asset, and a fabulous hiring coup. But this wasn’t the first time Lacey McHenry wondered how the man managed to get up in the morning and make it to his office fully clothed.

She stood in the open doorway of the frog room. A large, rectangular steel tank hulked against the bare, peach-colored wall across from her, one of its three, hinged covers propped back against that wall. Live frogs and toads scattered the concrete floor beneath it, watching her with bulging golden eyes; more of them had trailed slime onto the gleaming linoleum of the corridor behind her in their break for freedom.

Apparently Dr. Reinhardt had come in sometime this afternoon and forgotten to close not only the lid, but the door as well. Collecting his subjects, he’d hurried off to his lab, heedless as a teenaged boy, and never mind that all the remaining amphibians could and did escape; never mind that someone else would have to clean them up.

Surely he was living proof that a man could be a genius and a moron at the same time.

The frogs continue to have a place throughout the story, so for inspiration I have small plastic tree frogs scattered about my office. 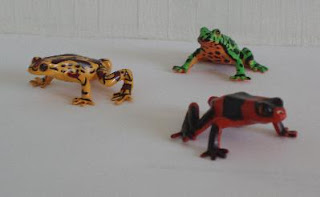 Thus, it's somehow strangely appropriate that the cyst under my tongue is called a ranula, named after the belly of a frog. Euwww! Supposedly because it looks like one, though I fail to see the resemblance.

I learned all this from my visit to the Ear, Nose and Throat specialist yesterday, a visit that consumed two hours of my time but only about ten minutes of said specialist! Anyway, it's more common in females than males, and more common in children than adults. In fact, he's never seen one in an adult.

It's a salivary gland duct that has been occluded...er...stopped up (been reading too much medicalese). We can go to the hospital and he can cut the roof of it off and let it hopefully form a new roof without the saliva inside it. Of course it might not do that and they'd have to cut the roof off again. Maybe again. Maybe have to take the salivary gland with the roof... Or we can just wait and see if it will go away. Which it probably will.

Since it's not really even bothering me any more, I opted for wait and see. The same thing I've done with the trigger finger. I suppose if it suddenly grows as large as my thumb, as the doc said they sometimes do (usually in children), making it hard to talk (heaven forbid) or swallow, then we'll take the surgery route. But that's future and we're commanded to stay out of the future so for now, I'm waiting.

The cause? They don't know. Possibly some trauma to the gland, though how that would be accomplished, I have no idea. Quigley's given me a lot of cuts and bruises, but I really don't think he could have reached the salivary gland. Maybe it was a particularly ferocious tortilla chip... The internet says it's bad luck.

Posted by Karen Hancock at 9:47 AM