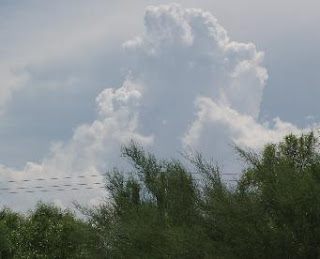 The monsoon is officially underway and once again we are watching the thunderheads build during the afternoon. This was taken through the front window, early in the process.

Last weekend our Pastor from Massachusetts, whom we listen to online, either live or recorded from a video stream and played three hours later (since 7 am is too early for everyone to get to church) came out to visit us, giving us some face to face teaching and some time of encouragement and fellowship. Friends from adjoining states came in for the occasion (as did our son, from San Diego), and we had a great three days. One of those nonstop talking things, that always leaves me with a sore throat, since I'm not that used to talking.

All in all it was a fantastic time. The things that were taught and said were amazingly right on target for the issues that we've been dealing with -- and the only way he could have known was through the leading of the Holy Spirit because we hadn't told him. Some of the things I hadn't told anyone about, so that was very cool.

I also got a chance to ask a question about the Nephilim (specifically how there could be some "afterward" as mentioned in Genesis 6, when they'd all been destroyed in the flood) which prompted a great deal of discussion. It's made me a little more comfortable about the theory I came up with for The Enclave, which I had begun wondering about lately.

Speaking of The Enclave, my editor has finished reading it, but will be out of the office for the next week until Monday the 7th when she'll be ready to talk to me about it. It seems weirdly appropriate that that should be the same day my mother begins her chemotherapy. I'm going with her and we expect to be there about 6 hours, so I probably won't be doing any book talk that day. We saw the doctor today, after the completion of all the tests, and it's become clear this will not be an easy process. But God chose it for our benefit and has His hand on it all. The important thing, I'm finding, is to stay in the moment and keep my mind out of the future.