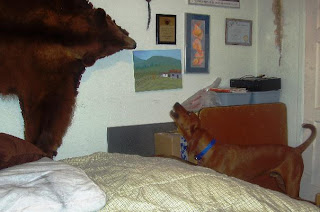 I think I mentioned that we have a bear rug on the wall of my office/son's former bedroom/storage room. One day, about a month or so ago, Quigley discovered it. He thought it was quite alarming and should NOT be on the wall. So he did what he always does when he discovers something that is not how he thinks it should be, or that he wants, or that is scary, or is weird or different or sometimes, just because: he started barking at it. I thought it was so funny I took a picture. (Again, you can see a bigger version if you click on the photo)

Of course from Quigley's position you can see the teeth in the bear's open mouth, so perhaps this accounted for his alarm.

Today I worked my way through the end of chapter 5. It was difficult, but I think it's close to being "right". Then I looked through chapter 6 and it's here where things are going to get really difficult. For one thing, I don't think there's much of anything in chapter 6 that amounts to anything. So I'm going to have to do some cutting and shifting and figuring. What I hope to do is move some elements forward from where they are currently in the story. Or if not that, I could develop my pov character and her friend a bit more than I have. I'll have to see where the Lord leads.

Oh, and in yesterday's post I tried to show how Pastor Rory Clark had personalized one of his concepts using these little arrows or whatever they are: <
Posted by Karen Hancock at 9:33 PM