The Hunt for Bin Laden 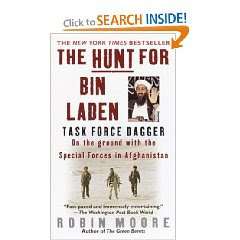 Over the weekend, I finally finished Robin Moore's The Hunt for Bin Laden -- Task Force Dagger (2003), which I bought in hard cover not long after it came out because it not only looked interesting (I'd read a review) but because I thought it might be a fun source of light research for The Enclave. Moore, "the first and only civilian ever allowed to go through the grueling Special Forces qualification course at Fort Bragg" is the author of The Green Berets.

The book covers the first engagement in American's War on Terror: the special forces twelve-man teams that infiltrated into different strategic areas of Afghanistan shortly after Sept 11, 2001 and aided the Northern Alliance in its battle against the Taliban. Sixty-two days later, with the liberation of Kabul, the campaign was over and won. A group of only a few hundred men had decisively defeated an enemy force of one hundred thousand. The book takes you right into the heat of battle, from the eyes of the Green Berets who fought it, and shares the successes and the foibles of their effort.

Unfortunately, it was only as I was looking up the Amazon url for this review that I discovered some of it was made up. Not by Robin Moore, but by one of his sources, Jack Idema (refered to in the book sometimes as the mysterious Jack and others as Keith Idema) who apparently did extensive editing on the ms Moore and his co-writer produced. This Jack claimed to be a Green Beret, and while he was apparently accepted into the program, he ended up being kicked out. There are all sorts of one-star reviews at Amazon, decrying the book, including one which claimed Moore has since disavowed the book. Not wanting to rely solely on Amazon reviewers, I investigated further...

Wikipedia confirms the controversy and also that Moore has disavowed the book. Citing Robert Young Pelton's book, Licensed to Kill: Hired Guns in the War on Terror, the article states, "Though [the Special Forces soldiers] never met or talked to Idema, and despite the fact that almost ten members had carefully detailed their actions to Moore at K2, the first chapter puts forth an account of the team's infill into Afghanistan that the men tell me has been entirely fabricated."

Nor was it just Moore he snookered. Apparently he spent a good deal of time conning a lot of people in the press as the Wikipedia article documents, including Dan Rather (that probably wasn't all that hard). Idema was convicted in 2004 of running a private Afghan prison and torturing Afghani's, but even before that he had a long history of crime.

That'll teach me to buy a book and take years to get around to reading it. Now I'm wondering if any of it is valid.

Probably some of it is, at least on the general level. One of the things that I was most struck by was how the SF guys would get into position on the ground and then call in the air support -- bombers, fighters, gunships, etc -- is probably ... Since I have a few friends who work on various weapons systems (as does my hubby) it was cool to see how it all works in action.

However, this revelation does explain the sometimes almost incoherent writing, and the weird episodes with "Jack". Though I'm told that Jack rewrote the manuscript in order to give himself a greater role, he failed in that attempt. The parts that centered on him seemed out of left field, having nothing to do with the rest of what was going on. He's the incredible young recruit who loved Moore's ballad The Green Beret and read the book which led him into becoming a Green Beret himself. Later, as "Keith Idema," he appears as the "retired" Green Beret savior of the National Geographic documentary maker Gary Scurka (with whom he'd actually entered the country); still later, he's the legendary superspy/soldier/advisor to the NA in Afghanistan... "Are there many men who call themselves Jack?" Moore supposedly muses, "Or is there only one incredible guy?" There's even an Epilog, all about Jack, which is really out of left field. I read it wondering, "Who is this guy? Why are you telling me about him sitting around in this bar lamenting the loss of the war and ruminating on how great he is? I don't recall him doing anything to speak off in the rest of the narrative..."

So, it's too bad. Lies infiltrate truth and the whole is tainted. After the controversy, publisher Random House quietly let it go out of print and the whole book died into obscurity. But it's also an excellent illustration of how the cosmic system works. Satan loves to take the truths of God and infiltrate them with lies. Just a few and then you don't know what is true and what is not, or you've gotten pointed off in the wrong direction, operating on assumptions that are false, while they seem true...

There are some other books to read about the war, and I may, but right now I still have some books on my shelf. But maybe I'd better check their Amazon entries before I start reading...
Posted by Karen Hancock at 7:29 PM