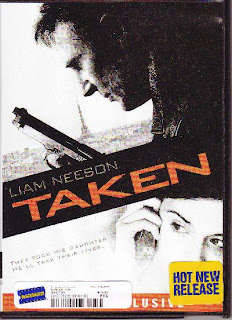 A couple of weeks ago, when it first came out on DVD, we saw the Liam Neeson action film, Taken. I really liked it! I liked it so much I watched it twice. It's the story of a father trying to recover his daughter when she goes abroad with a friend and is kidnapped in Paris. Or, as Imdb summarizes, a former spy tries to save his estranged daughter.

He's initially portrayed as a somewhat down and out middle-aged dad, the cast off husband and father replaced by this "successful" rich guy who can provide wife and daughter everything. Then little by little you learn about his spy activities and the fact that he was/is very good at them. I love that kind of storyline. Beyond that, the plot is fairly straightforward as these things go, you just don't know the details of where things are going to go. Some reviews complained it was predictable or had plot holes, but I didn't really notice and probably don't care, either.

What I liked, especially, is that Neeson's Bryan Mills seemed to be more Bond than Bond was in Quantum of Solace. Maybe it's just because I cut my teeth on Sean Connery, and almost all the others have seemed like imposters (well, except for Pierce Brosnan). What I loved about Connery's Bond was the way he always seemed to be one step ahead of his adversaries. He thought things out, he noticed things, he prepared. And he was very good at what he did. So you're sitting there thinking, "Oh no! This is terrible. How will he ever deal with this?" Only to find out he had it all in hand.

That's the way Bryan Mills was.

I also couldn't help thinking that the movie was a great metaphor for God and His children. The lengths He'll go to save us... and I don't mean just initial salvation, but to deliver us from our own stupid decisions. The focus, the determination, the fact that overall the daughter really doesn't appreciate Him -- she says she does, but it's clearly superficial. She has no understanding of who he is really, and yet he comes through for her. In fact, in the end

And isn't that how it is for us waaay too many times? We get all worried and concerned and anxious and then He always comes through. And we're amazed. And then, not long after... it's back to our worldly toys and focus. But it doesn't change His love. Or His faithfulness.