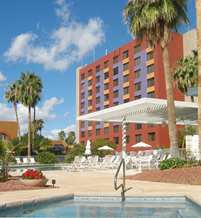 Photo: Doubletree Hotel in Tucson
This last weekend we held our third annual Arizona Bible Conference for Robert McLaughlin Bible Ministries here in Tucson. After temps in the high seventies for a week, clouds and a cold front moved in just in time for the conference. Not exactly what we would have hoped for to welcome attendees from the northeast and northwest, who had had their fill of cold and clouds. But so what! It was a great conference no matter what the weather.
Pastor McLaughlin continued his teaching on the seven churches in Revelation, taking up again the Church at Philadelphia mentioned in Rev 3:7 - 13 where he left off at the California conference in November.
He started with a brief reference to the doctrine of the open and shut doors, reminding us that God opens and shuts doors in our lives because He loves us and has a definite direction in which He desires each of us to go. When he shuts a door, we should be humble enough to accept it. If we push the door open -- and often we will be allowed to, if we insist -- we will not end up where He wants us to be.
After that he took up the concept that Jesus Christ controls everything, as referenced in Colossians 1:15-17, and many other passages. "The continuation of the universe and creatures and the stabilized atmosphere of our earth depends not on the devil or people or so-called scientific laws, but on the omnipotence and perfect integrity of our Lord Jesus Christ." He upholds all things by the word of His power, even when he was a baby coming forth from the womb, even when he was on the Cross. In fact, when He was on the cross he could have called on the angels to deliver him from the lies, the mocking, the people who had put Him up there, but he did not, because He chose to stay until all our sins were paid for.
So-called scientific laws were not created by science, nor can science uphold them. Science simply observes, investigates and plays with them. (A point that reminded me of something I'd read recently in an interview with Michael Crichton, that "Science is a self-correcting discipline." Meaning that whatever is believed to be true about things today, will most likely be "corrected" as men continue to observe and investigate the environment in which God has placed us.)
Pastor McLaughlin listed some items that supported this concept of "self-correction," starting with Erastosthene's 3rd century BC tally of "all" the stars: 675. This was presented as scientific fact at the time. In 200AD, Ptolemy counted 1028 stars. Flamsteed in the 18th Century counted 3000. In 1862, as telescopes continued to improve, 300,000 stars were counted and today, of course, the count is over 200 billion in the Milky Way alone. The stars didn't change number in all that time, only our ability to see them. Which is, of course, the obvious and major limiting factor in science: our ability to perceive all the necessary information and then to correctly put together what we've perceived. It confounds me how men and societies continually conclude that they've finally gotten all the relevant facts, only to discover later that... they did not.
So it's not science that made the laws or governs them, and it's not science who put us here, and really, it's not science or scientific advancement/invention that will destroy us or preserve us. That power belongs only to our Lord. Science can only observe His brilliance and His faithfulness and His power. And if science contradicts what His word says, then I'll take His word, and wait for those scientists to correct themselves!
More important though, the upshot of examining the fact that it is Jesus who controls everything, who made everything and maintains everything... that He contols the storms, the winds, the thunder and lightning, the rain, the sea... that there is nothing outside of His reach -- the conclusion you come to is that there is not a single problem in your life He can't handle. And yet how often do we get distracted by and focused on the details of our lives and all we can see is the problem. How silly to let ourselves get all flustered and frenzied when we know the one who numbers the very hairs on our heads, and yet holds the planets in their paths and hangs the earth on nothing! It's an awesome study to meditate on.
And that was only a snippet of what was taught the first morning.
Karen
Posted by Karen Hancock at 5:27 PM