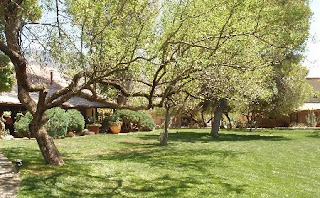 Continuing our weekend anniversary celebration at the Tanque Verde Ranch, we got up bright and early Saturday morning and arrived down at the corral at 7:15 for our hour-long scenic walking ride. It wasn't hot yet and the trail wound through saguaros and then a mesquite forest. It was fun, easy and a beautiful desert morning with lots of birds. We returned in time to eat breakfast at the dining room (they have a continental buffet plus you can order eggs, bacon, french toast, etc off the menu). Then it was back out for our lope lesson.

I thought this would be half an hour of loping and trotting around the ring -- enough for me to find my riding seat after ten plus years of not having done it. Instead the wrangler got the six of us who reported for testing mounted, then took us out to an arena and told us we had to, one at a time, take our horse from a standing stop to a lope and keep it loping once around the arena. During that time she would evaluate us for position, technique, comfort, etc. (Your butt is never supposed to leave the saddle, your legs are not supposed to cling to the side of the horse, you aren't supposed to grab the saddle horn and your hands and arms should be quiet and in control, not flapping all over the place.)

When we were done she passed five of us (including me) and the other fellow she worked with a couple more times before finally telling him he'd have to take the Intermediate lesson.

On the way back they told us we could go on the lope ride, which was to leave immediately, even though we hadn't signed up, so we did. It was the best loping ride I've ever been on. There were four of us plus o 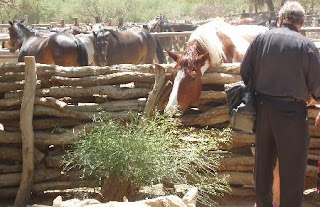 ur wrangler guide and it lasted an hour and a half. The loping parts were fantastic and for satisfyingly long stretches. When the first one just went on and on, I was amazed. I used to guide at a stables in high school and on our trail there was only one loping section. It was about a quarter of the first one we went on at the ranch. Yes, the first one. There were about five or six others in all, each just as long. Mostly I did okay, but it wasn't until the last one that I really, finally found my seat...

On our third or fourth time to lope, we were heading down a wide wash, and I saw a rabbit and then a quail dart across the trail ahead of the guide who was running about three horse lengths ahead of me. Shortly after that my horse spooked, pulling up hard and dodging suddenly to the right. I went off on the left and hit the washbottom -- soft sand, so I was thankful for that. Of course that was terribly embarrassing. I got up. Felt a bit knocked about but basically okay. Nothing really wrong... I got back on and off we went.

Soon we were loping again and all was well. Except that as we would slow from the lope into a trot my right ankle began to hurt intensely. I couldn't recall doing anything to my ankle in the fall, so I thought maybe I'd hit it on a rock and bruised it. Loping and walking were no problem, and as I said on the last long lope I finally found my seat.

We came back, dismounted, I had to fill out some paperwork because I fell off (cringe) and then we started to walk up the hill to our room. My ankle was hurting, but I could walk on it if I stepped right. Then I started getting woozy and kept having to stop and sit down. That was weird. Nothing hurt badly enough for that. Maybe I was dehydrated... 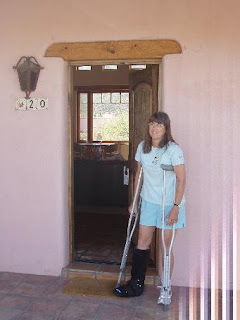 Well, to make a long story short, after lunch we went into town to get my ankle x-rayed and turns out I have a distal fibular fracture. I was in complete disbelief. The doctor said that in the torquing that obviously sprained my ankle the tendon actually pulled the end of my fibula off, breaking the bone (the fibula is the second, slender bone of the lower leg). Fortunately the fracture had closed and the piece was back in line, so they gave me a huge black boot/brace and crutches and a referral to an orthopedic specialist.

I wasn't about to let that ruin our celebration, however. That night we went to the Western Barbeque down in the cottonwood grove (without boot and crutches -- I didn't feel like I needed them that much and I didn't want to get them dirty). The next day after breakfast, I sat on our back porch, wrote in my journal and sketched the desert while a mama ground squirrel and her baby wandered nearby. 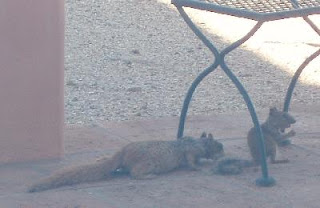 The whole spooking incident and then the bizarre break are so weird, it's obviously part of God's plan. There was nothing anyone did wrong or could have done to prevent it. It's just how it is with horses. They spook sometimes and people fall off. It's actually the third time I've been injured from a fall off a horse (though certainly not the third time I've fallen), and not nearly as bad as the last time, when I sprained my right shoulder and left hand. To have that injury now would really shut me down as far as writing goes. For it to be my leg actually helps the writing, I think, because I'm going to be pretty much a captive in my office! I suspect that's going to motivate me finally to start making some serious progress on this next book.

And it sure wouldn't stop me from coming out to the Tanque Verde Ranch again. In fact, I'd like to try that loping ride a second time. Accident and all, I had a great time.