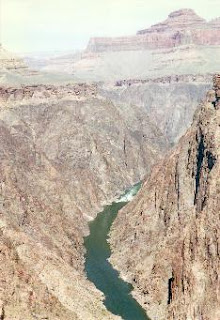 Another criticism of Return of the Guardian-King that came up in the April Blog tour was that some felt there was too much trusting of Eidon in it. In fact one person phrased it as "Come on and jump off this cliff, dearie, and Jesus will save you." That phrasing almost knocked me over, for reasons I'll explain in a bit. Another person claimed that too much trusting is unbiblical.

Now, I will be the first to admit that it's very possible the issue was visited a bit too many times in the course of the book and that if I did a subsequent edit, now that time has distanced me from it, I might agree the references needed a bit of a trim.

On the other hand... I'm not sure trusting God can ever be visited or mentioned too much. At least in life. And if I did so in the book, it's likely because every single day, sometimes every hour, I was having to trust God to get me through the writing of that novel. It seemed that I never knew what I was going to do next, that the days were passing faster than the words were accumulating and I was having to fly through it by the seat of my pants. Scenes would appear and be written down without any sense on my part of what they were doing there, or how they fit in the overall scheme of things. Weekly, sometimes daily I had to let go of my compulsiveness and really not think about schedules or guilt and just relax and trust the Lord to see it through. And when I was faced with doing that, sometimes it literally felt as if I were jumping off a cliff.

Which is why that phrase so startled me. I had not realized until I was working my way through RotGK how much I had always used guilt as a motivator. How I would set up a series of goals to accomplish -- like "finish the scene today," or "complete the chapter in accordance with my schedule," or "work on the book for four hours and get ten pages written" -- and then when I failed, flail myself for that failure.

But guilt is a sin, and I knew that. It is not the way God wants us to live our lives. When I came to the point of realizing what I was doing, and that I had to stop making myself feel bad for not having accomplished my plan, I remember thinking in a sort of horror that if I didn't have that guilt and the subsequent "Bad Girl! BAAAD!!!" to regulate myself, I might not get any work done at all.

That was the moment when I realized what I was really using to motivate myself. And not only that, but that I'd done it almost automatically for all of my life. To let go of that, to let go of schedules, to totally stop thinking about how I was going to accomplish the writing and leave it all to God -- that's when I stood at the top of the cliff and realized He wanted me to jump. About like standing on Plateau Point in the Grand Canyon and looking down at the green ribbon that is the Colorado River (see photo, above). And jumping. It was not an easy thing to do...

So, is there too much reference to trusting in Return of the Guardian-King? Possibly. Is that really a bad thing? I don't think so. Too much trusting is better than not enough. Is it unbiblical? Perhaps it can be, but I don't believe it was for me in my life, nor for Abramm in his... But I'll leave elaboration on that for tomorrow.