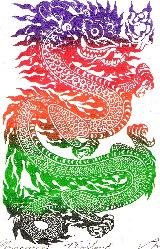 Recently I heard from a reader/friend who has been teaching English in Communist China for several years now -- she's Christian and through the means of the relationships she develops with her students and colleagues, she has been able to share the Gospel as opportunities arise. She showed her students a DVD of the Chronicles of Narnia and was thrilled with the conversations and student writings that grew out of that.

Recently I got a note from her on a notecard (see picture) she got in Thailand on a conference. When writing to people outside of the country they are given very strict guidelines to follow and so can't always state things as clearly as they might otherwise, but here's part of what she said:

"I also wanted to tell you that you have helped many others in the same profession as I that you probably don't know about. How your books ended up in random book stalls in northern Thailand, I'll never know, but they were for sale there -- and I can't tell you how many of my friends told me I should read them (I told them I already had :-) ) One poor bookseller sold completely out of them!"

My books are being sold in northern Thailand. Wow. That absolutely floored me. So many times God has done that, just opened the blinds a little bit on things He has done that I've known nothing about and would never even have imagined. This is one of those times. It reinforces the edict: NO MORE WHINING!

To work!
Karen
Posted by Karen Hancock at 7:06 AM