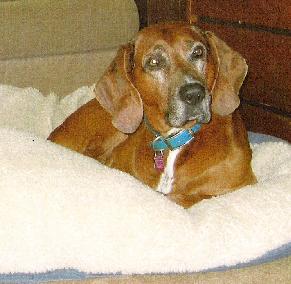 Today we said goodbye to our dear friend of 12 1/2 years, Mr. Booboo Bear -- writing buddy, walking companion, inept coonhound, movie star, obedience trained trick dog, computer degausser, Bible doctrine dog, home security system, camping & hiking dog, unrelenting optimist ("Maybe today the ham will fall on the floor and I will get some!"), tireless enthusiast ("A WALK! We're going on a WALK! Whoopee! Oh, thank you, thank you, thank you!"), all around lover of life and...yes, I know I said this, dear, dear friend.

He'd been declining for some time, but in the last few weeks things began to really deteriorate. We discovered that he had gone blind in one eye, he was losing his co-ordination and his stamina, and often seemed to "zone out". If he got up in the night, he might get "lost," standing for hours between the bed and the desk, for example, or in the hallway. One night last week he got up while we were sleeping and made his way into the space under the headboard of our waterbed, between the bed itself and the wall. The side he entered through was open, but the other was blocked with boxes. We awoke at 2am, and saw he was not in his bed beside us. I searched the house and couldn't find him, and Stu said he thought he heard him by the bed. So I looked in that space and sure enough, there he was. You can't pull him out of a place like that, so we had to move the boxes and feed him on through.

Anyway, he kept eating, though it was less and less, and he kept wanting to take his walks, though he stopped more often and for longer periods of time during the course of them. This last week he began to sleep almost all the time, getting up only to go outside to pee. When he did, he seemed weak, wobbly and disoriented. I began to bring his food to him in his bed and soon realized that my own interaction with him had been reduced to waking him up to drag him outside to pee or stuff a pill down his throat or stick a needle in the scruff of his neck to give him his fluids. Last Tuesday we decided it was time and on Wednesday I called the vet and made arrangements for her to come out today, Friday, to put him to sleep.

He was lying on his bed in the living room when she and her assistant arrived, and was actually more responsive to her than most of the other people who have come lately. (Which means he lifted his head and pricked his ears and kind of sniffed her hand, as opposed to merely wiggling his eyebrows). The procedure was accomplished very smoothly and his passing could not have been more peaceful.

The vet said he'd declined a lot since the last time she'd seen him six months ago, and that we had made the right decision. she could not believe how long he lasted, though -- dogs usually don't survive kidney failure of the level he had for more than a month. He was a fighter. But he was also blessed with an extraordinary amount of strength and energy. And his enthusiasm stayed with him almost to the very end. He was a terrific dog -- fun, funny, beautiful, cute, smart, vibrant and an incredible blessing. We thank God for the time we had with him, but we're going to miss him an awful lot. Especially me. 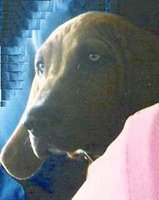 Posted by Karen Hancock at 1:44 PM