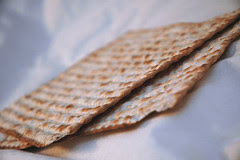 Two weeks ago our Sunday lesson included a mention of the problem of leaven. Our pastor was speaking of the connections between the Passover and the Communion ritual that has replaced it -- how in the Passover the bread had to be unleavened and furthermore that the Jews had to first clean out their houses so that there should be no leaven in them when the ritual was observed.

Leaven in the Bible always refers to forms of evil, either the leaven of the Pharisees, which is the evil of religion and legalism, or the leaven of Herod, which is the evil of materialism, hedonism, worldly thinking, etc. (Mark 8:15) "A little leaven," says 1 Co 5:6, "leavens the whole lump..." It's a little thing, a little bit of anti-grace thinking, a little bit of human thinking. A little area that is taking you away from fellowship with God or from the calling He's placed on your life. It's like the little foxes of Song of Solomon 2:15 -- they are ruining the vineyard. They are cute little things, babies even. They seem benign, playing about, having fun, but they are ruining the vineyards while they are in blossom.

We have to step back and ask ourselves, "Are there areas of our lives where we've still got bits of leaven that are hindering us from being dedicated and devoted to carrying out God's plan for our lives?" If so we must get rid of them.

That lesson resonated with me and I think the Holy Spirit was telling me even then that my problem was greater than just too much involvement in groups, magazines and so forth. He dredged up the whole marketing issue again... suggesting that perhaps this was some of my leaven. I balked, but the next day with a passage in Joshua (5- 8) He nailed it down solidly. I have often said I do no marketing and am relying on the Lord for that. But that day He made me see I wasn't being entirely truthful with myself: I was still holding on to bits of it. Little areas of marketing that I thought I had to do. Things that not only ate up my time, but that I believe have stood in the way of the Lord doing His work. He's a gentleman, after all. If we insist upon doing a thing, He'll step back and let us...

Things like sending out postcards (which I'd been in the process of designing), like increasing the subscription numbers on my newsletter. Like the local booksigning I was in the process of setting up -- which had already started out badly. The contest. My blog and the blog tours. All, when taken together, ate up inordinate amounts of time, not to mention mental, creative and emotional energy. But when I considered backing out of all that, I found myself facing the fear that if I did, everything would fail -- and already it wasn't doing so great. If I did that, why ... readers would forget my books! New readers would not be found. Everything would only get worse. How could I do that?

But the Spirit nagged at me. "Are you going down to Egypt for help?" He asked. I went to the Bible to look up that passage in Isaiah. But as I took it up, the book slid out of my hands, and opened itself to a passage in Joshua that I had previously boxed: the conquest of Ai in Josh 8:24 - 26. That gave me a chill for I recalled at once that the stories in the OT were written for our instruction and example, and that the fortresses the Israelites had to conquer and subdue are physical illustrations of thought fortresses we have to subdue as church age Believers. Everything physical in the Old Testament is a type of the mental and spiritual battles we face in the New.

When the Lord gave the Jews instructions for taking Jericho, He was very clear that the people were to take from it nothing for themselves. All in it must die -- men and women, young and old, ox and sheep and donkey. Everything in the city represented our old ways of thinking. Human thinking. The old things we relied upon -- human assets, human ways. Human help. Those were not to be taken. They were to be destroyed.

The words leapt off the page at me. I had not removed the forbidden things from my life. I was still, in my thinking, relying on human help. On my efforts and those of other people. He'd told me from the start that I was to write and He would see about the distribution of it. I've always wanted that, but the world has told me that writers cannot do that. We must market and network and get out there. There are a million things we have to do and if we don't, why we're unprofessional! We're flakes! We're dreamers! We're unrealistic. We're doomed to fail.

Maybe. But if we do all that, some of us cannot write as we ought. I can't write the way I want to write. The kind of books I want to write. In the face of that, the concern of no one finding my books fades to unimportance. What good is a bunch of people finding my books, if I haven't done the best I can as unto the Lord who called me to it? And it only makes sense that the thing I know I am gifted in, the thing I know I am called to do, the thing I want to do, and carry out as compulsively as I breathe, should be the thing that I do with all my heart and mind and soul and strength. If God has called me to do that, and given me the desire and the ability to do so, shouldn't I do the best that I can and not eat up my time trying to assure success? Especially when promise after promise tells me not to?

Proverbs 23:4,5 Do not weary yourself to gain wealth (success?). Cease from your consideration of it. When you set your eyes on it, it is gone. For wealth certainly makes itself wings, like an eagle that flies toward the heavens.

And I'm going to act on that belief. One by one I've cut myself off from all the tasks still awaiting my attention. I'm not going to send out postcards and I'm even thinking of deleting my snail mail address file. This month will be the last contest on my website. I will do no more about the booksigning. I went into the store and left my card. If the woman calls me back, I might say yes. I'll see how the Lord leads. But I no longer believe I HAVE to do any of it.

Perhaps some of you are wondering about the upcoming blog tour. Since it's already in place and I know that Bethany House is sending out the books and such, I will certainly go along with that, because that's not really something I initiated or have to orchestrate and maintain. The newsletter and this blog remain in question. For awhile I argued back and forth on them, but then I wearied of it, and put them in the Lord's hands.

He's not made those issues clear to me, yet, so I'll make no decision on them for now. I'll simply trust Him to work it out as the days pass. If things fell into place, I'll do them. If not. I won't. I think this is where I've been supposed to be since the day Steve Laube called me with the news of the Publisher's Weekly review of Arena and the marketing department's sudden, unbelievable interest in "how soon they might see something new from Karen Hancock."

It's been a week now since I dropped it all. I cannot believe the peace that I have enjoyed in that time. The increasing clarity of my thinking. The work I've gotten done around the house, the time spent with friends, going to a rubber stamping class, reading (slowly and taking notes so that I'm learning as I go). The heavy, wooden-headedness that gripped me at the end of the writing of Return of the Guardian-King has lifted. I'm thinking more and more of the next book now. In a playful way. A fun way. I feel set free, actually.

Until next week,
Karen
Posted by Karen Hancock at 8:23 PM