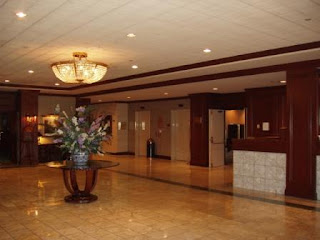 Last Thursday, Mar 15, I headed out for San Francisco for another weekend of learning God's word and fellowshipping in the company of like-minded believers from all over the country. This was the first time for the San Francisco group to hold a conference and it was wonderful. At left is the lobby of the Doubletree Hotel --San Francisco Airport -- where it was held.

Again he stressed the importance of knowing which dispensation we are living in, for without that knowledge it will be impossible to live the Christian way of life.

From there it was on to the exegesis of Rev 3:14 which begins the passage on the church at Laodicea. The first word of note is aggelos which can be transliterated "angel" or translated "messenger," depending on its usage. When it refers to supercreatures, the transliteration "angel" is used; when it’s referring to something in the human realm, it should be translated "messenger." In Mt. 11:10, Mk 1:2, James 2:25 you find examples of when it’s used for people and translated messenger.

In this case, it refers to the pastors of each of the seven churches in Asia minor at the time, and also to the future pastors of the different types of churches in the church age, who are certainly God's messengers to us in these days. But the Pastor does not have a special in with God. He has a voice. Behind the voice must be thought and understanding of the word of God in the original languages, in the historical context in which it was written (Isagogics) and in the comparison of scripture with scripture.

The Bible is the most important textbook, historical tome, instruction manual known to man. It is the one book we can study constantly and still not learn all that it contains. It will survive all time and the destruction of all the present universe. It contains the very thoughts of God, given to us so we might know Him – who He is, what He’s done for us and what He wants us to do.

It has always seemed like a no-brainer to me that the Bible beyond all other books or sources of knowledge should be studied intensely -- like no other. In it are the keys to life in time and in eternity. In it are all the answers to any problem any person will ever face. It contains the answers to why we are here, how we got here, where we are going…

But we can’t all sit down and spend all day studying the word of God because we have to feed and clothe and shelter ourselves. Thus God provided the gift of pastor-teacher. To certain men He has given the gift of pastor teacher, and they are to be supported by those who are assigned to learn from him, so that he will be free to spend his days in the concentrated study of the word of God.

It's not an easy calling. In fact, the daily teaching that is the practical outworking of Our Lord's command to Peter to "feed my sheep" is the easy part. It's the studying that is the hard part. The part that requires discipline, dedication, preparation and a great deal of mental effort. It may take a man all day to unravel the meaning of a single verse – insights that may take but seconds for him to speak when he teaches his congregation.

I can never be reminded of this without feeling a depth of gratitude that God has given me a man who is willing to do all this. It's hard work and unfortunately there are pastors out there who do not wish to do it and so resort to other, easier routes.

More than that, there are many believers who do not wish them to. Believers content to scratch the surface of the love letter God has sent to us under the assumption that the deeper truths, the theological matters have no bearing on their day to day lives. They just want to get by. Or maybe they just want to get whatever they can out of it so as to have a nice life.

I was especially struck by the words Pastor McLaughlin spoke toward the end of his message:

The Lord Jesus Christ had many lovers of His heavenly kingdom, but few bearers of His Cross;

Many seekers of comfort, but few of tribulation;

Many companions of His table when He was prospering, but few in fasting.

Many desire even now to rejoice with Him, but few are willing to undergo suffering for His sake.

Many are eager to follow Him so they can eat of His loaves... but few that they may drink of His cup.

Many say they love Him, so long as there is no adversity.

And many will praise and bless Him so long as they receive comforts from Him. But if He withdraws Himself from them, they fall into complaint or even great deception...

As I said, it was a great beginning to a great weekend.