Recently I've been going over some old notes from The Idiot's Guide To Genetics, which I read a number of years ago, and came across the following:

"In 1952 Alfred Hershey and his assistant Martha Chase studied bacteriophages -- viruses which attack and infiltrate bodies of living bacteria and genetically instruct them to make new phages out of the bacterias' own material. Numerous phages are made, then burst out, killing the host.

"Hershey and Chase mixed phages and bacteria in a blender so as to separate the bacteria from the phages and learned it was only the phage's DNA that got into the bacteria to reprogram them. This led to the conclusion that DNA is responsible for hereditary instructions." 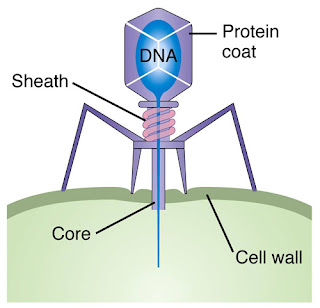 (Cartoon From Molecular nanomachines at the Department of Biochemistry, University of Zurich)

The bacteriophage has a little cell puncturing device which stabs down into the cell and delivers the viral DNA from the "head". Once inside the cell the viral DNA goes to work.

What has always struck me about the whole function of viruses is the excellent analogy they are to what happens when the cosmic system attacks a soul. Say, for the sake of this analogy, the believer has a soul full of doctrine -- God's truth. That doctrine acts like the DNA in a normal cell, basically as the command center and instruction guide for the cell's proper function. Along comes the "cosmic system phage," with a totally different set of instructions (the CS-DNA) which it inserts into the soul. The soul's old, proper instructions are immediately corrupted and begin to produce replications of the cosmic lies it has just been infected with, that tell it to do -- and think -- things entirely different from the original instructions. (Which is why we can be tooling along, perfectly fine one day, and, should we be hit by a cosmic system phage, be thinking like a different person the next.) If that goes on long enough, the soul becomes a veritable factory of cosmic system phages until they finally burst it apart. (There's even a doctrinal analogy for that: fragmentation of the soul.)

In fact, as I pursue this analogy I see that when our bodies are infected by a virus, they do exactly the same thing. Our noses start to run, we begin coughing and sneezing, and soon we are virus factories ourselves. I especially like it that we take in the virus by breathing or eating, both Biblical metaphors for perception of spiritual (or cosmic) truth.

By the way, "virus" is Latin for poison, and "bacteriophage" comes from the Greek phagein, "to eat."

Here's another picture, this one an electron micrograph of an actual T4 bacteriophage infecting a bacterium. You can see its little cell puncturing device penetrating the bacterium:

From An Introduction to the Bacteriophage T4 Virus at dFORM.

Pretty cool the way God puts those illustrations all around us!

Posted by Karen Hancock at 2:10 PM