Well, even without the comments operational, I've been tagged again for one of those blogger memes. (For more on this see my blog post the last time I was tagged: I've been Tagged -- Twice ) This time Tim Waters, a regular reader of this blog, emailed to let me know he'd tagged me on his blog, The Abiding Life, to list six non-important habits or quirks about myself. Why anyone would want to know that, I'm not sure.

Of course there are meme rules which you're supposed to copy out and include, and then you're supposed to tag six others, but being the hermit-writer that I am, with no time, who rarely reads other blogs (though I did enjoy Tim's) I'm not going to do either. You'll just get the six, non-important habits or quirks.

1) I have tea and cookies every afternoon around 4:30 or 5. I also have tea along with breakfast a few times a week. I only like Twinings English (or Irish) Breakfast tea. I strongly dislike Lipton, yuck!, which my favored (nearest) grocery store suddenly decided to carry shelves of while it discontinued all the Twinings teas as it remodeled and "expanded" its selections. Now you can get all sorts of Mexican cheeses and refrescas, prickly pear pads, other weird vegetables, but you can only get Lipton black tea and some Celestial Seasonings blends (which I also don't like). They even discontinued my Stash chai brand.

The cookies are almost always brownies or chocolate chip.

2) I chew my fingers -- not my fingernails, but the little bits of skin that come up from around the cuticle and fingernails. It's combination of a skin quirk I have with a writer's tendancy to be orally fixated. Or so I'm told. When I was first reading about "How to tell if you're a Writer," one of the characteristics is that writers tend to want to stick things in their mouths -- they chew their pens, fingernails, the ends of pencils, straws, gum, etc, or they are smokers, which is also related to oral fixation. If you believe in that sort of psychobabble. I'm not sure I do, but it's a convenient excuse for my habit.

I do it mostly when I'm thinking or reading, so I'm not usually aware of the fact that I'm doing it. It gets worse when I'm under stress. Attempts to break it have been futile. Putting bad tasting stuff on them doesn't stop the urge to chew and always ends up in my eyes, where it burns. The best thing is to keep my hands out of water and constantly slather lotion on them (I mean like every hour or so) but that's not something I can remember to do either. When I do, I always find myself ready to type next and don't want to get lotion all over the keyboard. Or worse, after I've rubbed the lotion in, circumstances conspire to where I'm immediately putting my hands in water again.

3) I think I might have an almost habit or maybe a quirk (a peculiar habit, mannerism or aspect of somebody's character) of eating avocado melt open faced sandwiches with Chai tea at least three times a week. I've been doing this for ... a number of years. Could be something like seven years. I started doing it when my favorite place for lunch, The Native Cafe (which served the avocado melts on sour dough bread) closed down.

It's one slice of 12-grain bread toasted, cream cheese, sprinkle of garlic, avocado, sprinkle of onion, sliced tomato, longhorn cheese, melted in the oven. I throw in some tortilla chips to heat along with it and have to eat it with the chai tea. Nothing else will do.

4) Speaking of "nothing else will do," I have to drink my coffee with my waffle or breakfast crepes when I'm in a restaurant. If I run out, I won't continue eating. I just sit there and let the food get cold until the waitress comes to refill the coffee cup. That definitely qualifies as peculiar, I think.

5) When writing in my journal, I alternate ink colors -- black one day, blue the next, then black again. This is "important" enough that I have spent ten or fifteen minutes searching for the appropriate pen so I can write.

Well, last time I listed one more than the meme stipulated, so it's only "right" that this time I list one less. Besides, I can't think of any other non-important habits/quirks. Housework routines (as per Flylady), Bible class and exercise habits are important. My life is too filled with surprises for me to establish very many non essential habits. Even using the routines is sometimes a challenge, especially now with Quigley and trying to write a book at the same time.

Speaking of Quigley, I brought him into the office today and he lay beside me, chewed his chew and finally fell asleep while I worked. It was very cool. 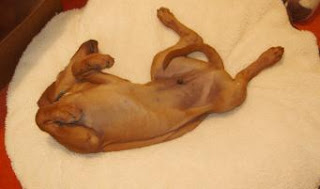 Have a great weekend
Karen
Posted by Karen Hancock at 9:28 PM