May is Halfway Over 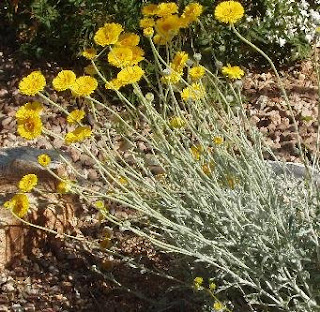 These are Desert Marigolds. They are common desert flowers. Most all the desert flowers are yellow because yellow is easiest for the bees and other insects to see so they can come and pollinate things. Yellow also goes splendidly with our blue skies and purple mountains!

Alas, spring is very nearly over now. Today it was 96 degrees according to my car thermometer. It was still 90 when we took Quigley for his walk at 6:30pm (three miles round the park now).

This has been a crazy month. Mother's day, the death of a friend's mother, a doctor's appointment (that shoots a morning's worth of time to work), a graduation reception, and last night my son's official graduation from the Eller Business College with a Master of Science degree in Management Information Services. Last week he was flown to San Diego to interview for a job, which he decided on Friday to take and will be leaving in about two weeks. On... um... June 1, in fact, which is also my deadline for this book. That cannot be coincidence!

It also means that get togethers we'd have put off until June can't be put off, so we're tending to do whatever comes up now because we know it may be a long time before we can do it again.

We also have an anniversary, a birthday celebration, and I'm on temporary duty watering my mother's yard while she visits my sister in New Mexico. Plus Quigley, who has settled down a great deal, though he's still AWFUL with visitors and still needs some sort of serious outing every day. We alternate between the two mile walk, the three mile walk and an hour or two at the dog park, where he is extremely friendly to all the people and really quite nice, except for the jumping up. They are mostly dog people though, so they aren't too bothered and he's not too intense about it, either.
Anyone who comes to our house for a visit, however, will be assaulted and mauled in his exuberance. He seems to think people enjoy being punched in the stomach by his paws, and also that they like to have their arms held in his mouth. We are having trouble getting through to him that they do not...

As for Enclave... I finished chapter 26 last week, then went back to address 24, which meant I first had to go back to chapters 2 and 5 to put in all the changes I'd decided they needed. That done, I finished 24 and am now about halfway through ch 27, lost in the chaos of all the possible things that could happen, trying to figure out which things will happen, and how they all interelate in terms of cause and effect. It's very fluid. I'm determined not to get all upset when the chaos comes, just take it in stride and wait for it all to settle out.

I am close to the end now, but I still don't know how far, exactly. Things are combining and telescoping in ways I hadn't anticipated, so what had a week ago looked like chapters and chapters worth of material, doesn't look like quite so much now. And it IS only a first draft!

Have a great week
Karen

Posted by Karen Hancock at 9:05 PM