[It's raining! As I write this. A thunderstorm blew into town today. Lots of lightning, not much thunder. We took Quigley to the dogpark and got sort of rained on while he played with a Rottweiler.]

So yesterday amidst the whole cut-up paper clip incident described in the last post, I had informed Quigley quite clearly that I was very unhappy with him for getting something and running away and eating it before I could see what it was... very unhappy. Not going to have anything to do with him unhappy. Banish him to the backyard without even doing tricks unhappy.

Okay, yes, when I found the clip and realized he wasn't going to die, after all, and we weren't going to have to spend $2000 after all I put all that behind me and let him back in, so it only lasted the morning.

But still, it didn't do very much good. At the end of the day, I was in the dining room and things got very quiet. I realized I didn't know where he was so I went into the living room and found him coming in from the bathroom -- actually I think he was looking for me. So I could see what he had: the roll of toilet paper in his mouth and the funniest look on his face. Kind of "I know I'm bad/Are we going to play?" He was too funny, so I took a picture, then got the treat and traded it for the toilet paper and he didn't run away but gave it up easily... 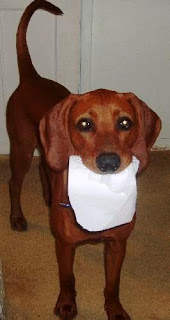 Posted by Karen Hancock at 9:05 PM