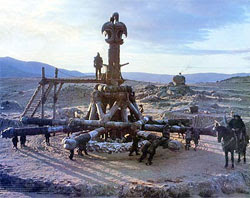 Wheel of Pain photo from the Conan the Barbarian

I got several responses to my blog of last Tuesday, the one with the nonstop, from kind readers offering comfort, encouragement, counsel and prayer. Thank you. I do appreciate your concern, your words and your prayers.

However, I felt quite foolish in realizing I'd created in some a sense of undue concern because I'd failed to communicate the fact that the crisis had been largely resolved by the time I got to the end of the nonstop. Or rather my thinking had been adjusted.

That's probably a shortcoming of the nonstop form, where you just set the timer and write whatever comes to mind for the designated period of time. Since I often start nonstops precisely because I'm stuck and frustrated or feeling like I can't write, it's common that the beginning of them is the ranty, gripey outpouring that appeared in Tuesday's blog. It's in the process of setting all that stuff down, that I see the lies for what they are, and inevitably get around to thinking truth instead. Sometimes that change doesn't always make it clearly to the page, because once the light has gone on and the struggle has ended, the pressure to keep writing goes away. (Or the timer went off... )

Since I had traveled through my frustration and despair to the metaphor of the grinding wheel and found that concept helpful, it seemed to me others might benefit from reading of my progression, moving from sinful, frustrated, self-absorbed, doubting thoughts, to the solution to any problem, which is always to remember who we are in Him, and get our eyes back on him. I also believed He was nudging me to post it, even though, raw and disjointed as it was, I wasn't sure anyone would even want to read it.

The crying jag did not come because I felt bad, though I see now that that was not remotely clear in the nonstop. It was more an expression of a deep and powerful emotion closer to appreciation than anything. The way God just breaks into the middle of your thinking and says the most increadible things. The fact He's there hearing it all, knowing exactly what silly path his child has taken for the moment and then exactly what it takes to get her back under His wings.

The point where the Lord said to me, "That is what made Conan strong" was what it took for me then. And I was amazed at how He had taken the bitter, frustrated direction of my thoughts (it's hard work and I'm walking around in circles) and in a second transformed the entire metaphor into something wonderful. Something encouraging, but something true. He showed me the truth of the situation, when I was looking at it through lie-tinted glasses. That blew my mind.

To be specific: the grinding wheel involves hard work, pain, and the perception of purposelessness, all of which are made more intense when you think you shouldn't be in it. But when you back up and realize that you have been put into it deliberately by God for His glory and your growth, that He in his perfection has chosen this very thing for you in all its specific detail, then you realize there is purpose. And wanting above all else to be conformed to His image, no matter what it takes, then the grinding wheel becomes not only acceptable but a thing of strange beauty.

That's what I was hoping to convey in that last post...