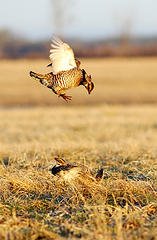 The eaglet grew up and learned to scratch in the dirt for seeds and bugs. He never flew very far and whenever he did, it was with great effort and flapping of his wings. He only did what the other prairie chickens did.

One day he chanced to look up and saw something flying high in the sky. “What is that?” he asked of his prairie chicken companion.

“That is a soaring eagle,” said the prairie chicken. “But don’t get any ideas. You could never be like that – you’re just a prairie chicken like the rest of us. Your wings aren’t broad enough or strong enough to soar like that. Besides, you don’t want to be up there all alone… Oh! Look! There on the ground! It’s a little black beetle!”

And the prairie chicken ran as fast as his stubby legs and flapping wings could carry him, clucking and squawking as he pecked the beetle out of the dirt.

It’s an analogy of course, a picture of the world and of the people in the world whose concerns are horizontal, earthly, temporary. They can fly, perhaps, but not very high, and not very far and it takes a great amount of energy. Once we become believers, though, we no longer have to live like prairie chickens – we can live like soaring eagles. But first we have to know there is a difference. Second we have to know what we were meant to be. And third… we have to learn how to soar.

Grace and peace,
Karen
Posted by Karen Hancock at 3:52 PM