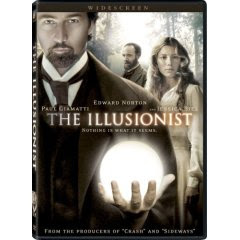 We watched The Illusionist over the weekend, with Edward Norton and Paul Giamatti. I am dangerously close to raving and burbling. I LOVED it! I want to see it again. I might even want to own it. And I don't like magicians. I don't watch David Copperfield or any of the others. But this one is cool.

The movie is a mystery, a love story, and an adventure. I've never seen Edward Norton before (my son says he's often in quirky movies I wouldn't like -- and this is the first time he's seen him as the good guy) but he was fantastic. Mesmerizing. Mysterious. Powerful. I am amazed at how I just wanted to watch him walk down the street (in character in the movie, that is).

Then there is the story itself and the way it's presented. I am fascinated by illusions, the ones people have about themselves, the ones people have about each other and the world in general, the ones the world foists off on all of us. The cosmic system is constantly dealing in illusion, and it is our need as Christians to learn to see through it all, so I suppose that's why it fascinates me.

This movie has layers upon layers of illusion. It is complex, it's thought provoking -- We are still talking about it. And because of that, I don't want to say too much, since it would destroy the effects of the illusions. Besides that, it was visually intriguing, elegant, mysterious, delightful. Even the magic performances...

It's rated PG 13, for sensuality (though the sex scene is done in such a way that it only gives the illusion of what's going on, not the down and dirty details) and violence (which is really minimal). Those aside, I'm not sure how much children would like it. You have to pay attention, you have to think and while I found it riveting, I like movies that aren't in-your-face obvious. Kids might not follow the story line easily.

Here are some reviews:

"Fascinating parable about art, religion and politics, and the misty boundaries between them. If The Illusionist approaches the realm of art, its spell is heightened by a subtly mesmerizing Philip Glass score and cinematographer Dick Pope's flickering, sepia tinted visuals, evoking early motion pictures and 19th century daguerreotypes." Jim Emerson - CHICAGO SUN-TIMES

For more check out the official movie site.

Posted by Karen Hancock at 6:50 PM