The Return of the Schedule 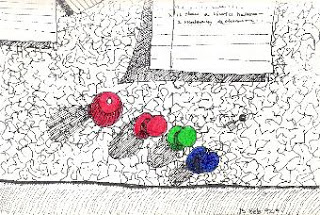 I've talked a lot in recent months about throwing out the schedule, about trusting God to see things through and not being such a control freak about everything. It's been my experience that every time I try to gain some control over the things in my life, something comes in to dash it to pieces. Rather than fret and fume and worry about not being able to get control, I chose the route of peace, shrugging it off and putting all in the Lord's hands.

Well, He did see things through, but they got very messy there at the end, and I didn't like it. Now that it's all over, I think maybe I misapplied. It's the nature of the spiritual life that we learn as we go, receiving the concepts in Bible class, then being set loose to try to apply them to our lives. We have success or fail entirely or maybe experience a combination of both. Probably that more than anything else. We thought we understood what the problem was, but as time and events unfold, we have second thoughts.

I have wrestled with this whole idea of routine and schedules -- for housework, for home schooling, for writing -- for more years than I care to recall. I've had schedules and I've followed them and they've fallen apart and I've fretted and fumed and become a slave to them. Not good. I've thrown them out the window and become a slave to my emotions and/or whatever person or events come along in my life. Also not good.

My pendulum tends to swing between scheduling and no scheduling. After the last year of virtually no scheduling, the pendulum seems to be swinging back. "Well," says I, "I sure didn't like the way that turned out. Let me try the schedule thing again."

But this time I want to think it out a bit more.

The Lord's already shown me that I was trying to do too much, and I've been making adjustments, pulling back from the networking and marketing which were the biggest time consumers... But that's not all that needs to be done. I think there does need to be a schedule -- to my housework, to my days, and maybe... to my writing. But I'm not going to tackle the latter until later.

Though we aren't to be enslaved to a schedule, I think the Bible is pretty clear we're to be organized, and routines -- schedules -- are part of organization. Recent lessons about self-control have brought this up, so I've been contemplating it. Asking myself why I think it's going to work this time when it's never really worked before. Wondering if maybe it worked better before than I realized, but that nothing is ever going to be perfect... Wondering if there might have been other reasons for the failure (my sin nature, the oppostion of the kingdom of darkness which will do whatever it can to destroy the routine in a person's life). Maybe I shouldn't have given up on it so fast.

Then, in going through the piles of paper in my office I came upon my notes from a class I'd listened to in October of 1999, buried among nonstops about Return of the Guardian King and writings about generating a storyline. Totally random. And not random at all.

It was exactly what I needed: the first thing those notes mentioned was that having self control means you have an organized life based on the fact that you recognize what is important. Those words leaped off the paper at me. Yes, I knew that. You set up your routine based on what you deem important. I thought I knew what was important. But now I realize I need to think that through a little more.