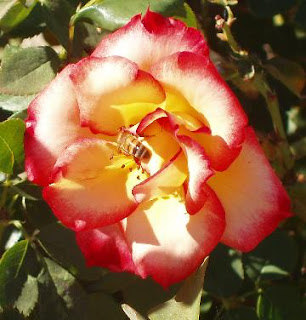 After all the craziness of that last book, I've been brought to a place where I want to know if there was something I could have done to have avoided it. I've taken it to the Lord, and while I had asked that question all along, my focus had always been on my writing methods. Should I let the scenes come slowly as they were wont to do? Or should I force them, writing things I had outlined even if I found it excruciatingly boring to do? (Dean Koontz advised never to write what bores you, because it will surely bore the reader and I've abided by that advice; but that is why I can't just crank the story out)
Well, the Lord has answered and there have been a number of threads to consider. None had anything to do with my writing methods.
The first has to do with me letting way too much into my life. I suppose that could be clarified into too many people and issues and things to do. Not only do they all take time, but they also fill up my mind with things. All these thoughts swirling around, or maybe jammed and packed in, things to think about, to mull, to carry around... if you look at the things you have to think about as objects you carry around... I would probably appear like one of those old time traveling tinkers with a huge pack on my back, pots and pans dangling, falling in front of my face, tripping me...
(There's actually a study that's been done on this, about the number of people one person can effectively have in their circle. It's called the Dunbar number if you want to read more about it. It's heavy on the evolutionary slant, but I thought the conclusions were interesting.)
Anyway, I had my finger in way too many things. And the only way I can cut back is to get away entirely. I'm like an alcoholic or an ex-smoker. If I don't get entirely away, pretty soon I'll be back at it. I guess I'm just naturally curious, and can rationalize way too easily. But I'm not the butterfly sort that flits from flower to flower sipping a bit of nectar and moving on. My personality is more the type that finds a flower and then wants to tear it apart, to see what it's made of, to look into its structure, to find the pistil and the stamen and the little bugs that are always inside there... That's a lot of information to fill up your mind with. If you're going to do that, you aren't going to be able to do it with very many flowers...
So. I've pulled out of virtually every group of which I was a member, canceled magazine subscriptions and unsubscribed from various ezines. It's a bit scary, but that connects to the second reason for all this, which I'll continue in the next post.
Karen
Posted by Karen Hancock at 5:43 PM