I am finally back from Denver where, as many of you already know, Shadow Over Kiriath received the Christy Award for Excellence in Christian fiction in the Visionary category. It's my fourth consecutive Christy.

The funny thing in retrospect is that, of course, I had to give a little speech. Last Wednesday I received an email from my editor passing on the requests of the Christy Award organizers. Award winners would be on stage for one minute and were expected to give an acceptance speech. These remarks "needed to be prepared, succinct, and linguistically captivating!" It was three days before my deadline. I was giving my all to finishing the draft of Return of the Guardian-King. There was no way I was going to come up with anything "linguistically captivating" in that state. Fortunately he said my past remarks were fine and so I decided to simply mentally rehearse what I would say should I win and leave it at that.

Well, of course, you never know if you're going to win or not, and the Visionary category is announced second to last. I'd just turned in a 211,000 word manuscript the night before and then flown to Denver that same day. Besides that, all the winners before me came to the podium with wonderfully moving remarks (some prepared, some not). Then the announcer read from the first chapter of Shadow Over Kiriath. That was not actually the book's opening line, so when I first heard it I thought it was someone else's... until he said "Hazmul" and then I realized... it was mine.

I went up and it started out okay, but then about halfway through my brain went into a snarl. I couldn't find the words, I couldn't keep the thoughts in order... I felt like I was babbling. In fact, that's what I finally said. "I'm going to leave now because I am babbling. Thank you." So I made a complete fool of myself. My consolation lay in knowing that most people wouldn't remember it longer than the end of the ceremony. Later I thought it was kind of an amusing way for the Lord to keep my head from getting too fat: I may have won 4 Christy's but when it came to speeches that night, I sounded like a complete flake. Proof that He uses the foolish things of the world... 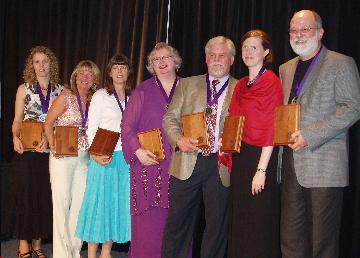 Posted by Karen Hancock at 6:46 PM