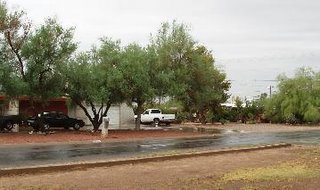 It's raining today! Hooray! I love rain! I love gray days and shiny streets and rain streaking the window. Understand we get about five of these a year -- our grass has died seemingly beyond revival in the current drought (we think the termites might have consumed the roots). Even when we have storms, they are almost always interspersed with sun, and the monsoons that blow through only last about 1/2 hour. Which is why everything stops while I go and watch. And when we have an extended rain like today I open all the curtains and savor it.

Well, I was going to write about reviewers' rights to say what they want and how the negative reviews have actually helped me, but then blogger was acting funky last night, it was miserably hot and sticky and I was tired. So I put it off for today, only to find I've got way too much stuff to write about and it's all tangled up in itself. I nonstopped to some degree but I keep jumping from one subject to another...So that is going to have to wait until I can sort it out.

Meantime, a report: I talked to my editor for an hour and a half yesterday morning about her feedback on Return of the Guardian King and learned to my chagrin, that I had neglected to put Chapter 25 into the attachment when I sent the book! It's at the end of Part 2 and the guy who turns the emailed book into a hard copy for the editor didn't notice, and neither did Karen. She was bringing up an inconsistency between where Abramm was last seen in ch 23 and where I take up with him again in ch 27 and we realized what had happened. There is a "Chapter 25" both in the file I sent and in the manuscript she got. There just isn't any text to go with it. One of the things I was going to say about negative reviews is that they keep you humble, but I'm not sure I need any help from them at the rate I'm going here.

As for the feedback, there's a normal amount -- about six pages single spaced, and many helpful suggestions and good points. There's only one part of it that I'm having some trouble with: she doesn't like one of my favorite scenes, but she couldn't tell me any more than that it's not believable to her. The other two reviewers didn't mention it as a problem, and she told me to do what I want to do. But I want to see if I can figure out why exactly it might be a problem and then what I can do to fix it. Beyond that, nothing that I didn't expect. To quote from her conclusion: "I truly believe that all the elements are in place for a great final book for LEGENDS OF THE GUARDIAN-KING." So that's nice.

And last but not least, while I was trying to get Blogger to work this morning I found this from Publisher's Weekly over at the Charis Connection Blog courtesy of Angela Hunt:

So. I'm among the 25,000 who sold more than 5,000 copies and I'm happy. Angie's written a very interesting article about the money authors make that I recommend to both writers and readers: Charis Connection.

Enjoy
Karen
Posted by Karen Hancock at 10:44 AM