a lab tour, a conversation & links 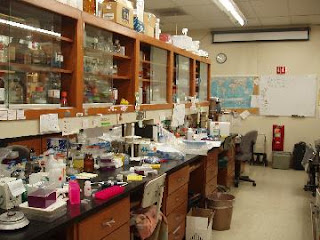 Well, I thought I would not work on my next book for at least two months. But I guess the Lord had other ideas because over the weekend, the opportunity presented itself for me to tour a genetics lab at the UA (above). A friend of my son's works there, and was available to show me around, so this morning at 9am I went over. It was the perfect time what with school being out and the campus relatively empty. No parking problems, no getting in the way of people trying to get to class or do their work. I learned a lot. Learned even more of what I don't know... and am very pleased with the experience. I love the difference between real labs and the ones on TV. Real labs look more like my office, for one!
And then today, as part of an interview I'm completing for Where The Map Ends, I had to come up with a little blurb that tells about this next book, working title Black Box. (They've already told me that title won't do, since some airplane book out a couple of years ago had that title. I thought Black Box was a clever title for a number of reasons, but in light of this -- ie, that most people think of airplanes when they hear "black box"-- I suspect it's a bit too clever.)
On another note, over the weekend, I also had a conversation with another friend of my son's who works at Barnes and Noble. What she told me about her process of keeping shelves stocked was a little different than that article I linked to the other day. For one, if she notes that books in her department are selling, she will ignore what the computer says and increase the amount of books she orders. She also hand sells books she likes. And, something that really surprised me, she told me that the store very rarely initiates a return of books. Returns are almost always initiated by the publisher. I suppose so they can have more shelf space for their new releases...
And finally... the epilog is now in place at the end of Return of the Guardian-King. My editor loved it and thought it was just what the book needed. I'll reserve final judgment until I go over the galleys in a few weeks...
Grace,
Karen
PS. Check out Becky Miller's blogpost An Open Letter to Christian Fantasy Readers for some thoughts about why Christian fantasy isn't selling as we'd like and what she thinks people can do about it. Also, she's got an interview with Nick Harrison up on Speculative Faith concerning the new fantasy trilogy Harvest House will be putting out next year.
Posted by Karen Hancock at 5:42 PM