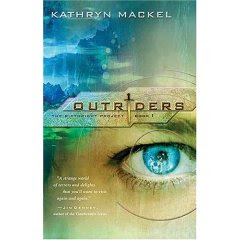 Wednesday is the last day of the CSFF blog tour highlighting Kathryn Mackel and her newest release in the Birthrighter's Project, Trackers. Yesterday I mentioned that Beth Goddard was doing an interview and today I read part one of it (part two should be up Wednesday -- which may or may not be today, depending on when you read this!). I'm glad I read it.

I'll be honest -- when I read the setup about the new Ark built under the polar ice cap, my picky, whiny, critical mode kicked in. I'm trying to keep that one in its cage, or at least ignore it for the most part, especially when I have almost no facts. And this is a good case of the need for it to stay in the cage. My thoughts on the new Ark ran along the lines of, (whiny voice) "Well why would God need to do that? He already did it once, and people deciding to build an ark to preserve the species... yada yada blah blah... doesn't really work for me..." But then I read the chapter and decided maybe that didn't matter. See, if the writing, the pacing, the world, the action and the characters are appealing enough, I can set my theological quibbles aside and just enjoy the story, and this definitely seemed to be one where I could do that (not that you can always tell if your theological quibbles are even valid from ad copy -- of all people I should know that!)

Anyway, then I read the interview and Kathy said that her intent wasn't to create a new ark as such but to present a "metaphor for the church or the Christian home. The world of the strongholds is what we face every time we step outside our sanctuaries. Just as the Birthrighters collect specimens to honor God’s creation, we share the Gospel to honor Christ’s sacrifice. In the books, the kingdom of Traxx is sheltered by a wall of thorns. How many hardened hearts are there behind spiritual walls of thorns that the Spirit is calling us to dare to approach?" How cool is that? I'm hooked. In fact, I ordered both books today and you can too. In fact if you go to the Trackers page on Amazon you can order them together for less.

Or you could go on over to Shannon McNear's blog or Beth Goddard's both of whom are offering the chance to win copies of the two book set of the Birthrighter's Project. Mirtika Shulz is giving away a copy of Trackers and also pointed me to a fun test on the Birthrighter's site that you can take to determine what type of hero you are. I took the test, but as with all these kinds of tests they never give me the right options. What kind of canine would I be? A hound! Not one of the choices. What would I do if I had a craving for chili? I don't like chili. Yuck. But I know lots of ways to make it... Sometimes the answer is "all of the above." More often it's "none of the above..." in any case, it came out that I'm a scout:

"Your independence and perseverance fit you to serve as in this role. Your job is to wander this fallen world as the eyes and ears of the Birthrighter camps. Your reports allow trackers to ride, hike, climb, or even swim the ends of the earth in search of original (non-mutated) species for the Ark. You also warn of troop movements that threaten camps or missions, going undercover as needed to spy on strongholds.

"Your mild appearance and shoddy clothes mask the quick strength and iron-clad determination that allow you to move through peril almost at will. Your strong spirit allows you to endure the solitude and lack of physical comforts that your duty requires. While trackers, teachers, and outriders live in Birthrighter camps, you cannot—your duty requires that your identity be kept secret and that you always be on the move.

"The stronghold princes don’t even guess at your existence. But should you fall into their hands, you would be far more valuable than an outrider or tracker because you know the location of all the camps and the pick-up sites from the Ark. Your inner strength keeps you on course and your faith sustains you, even though your duty is harsh and lonely."

Which isn't as off as I'd expected...

Scroll on down to yesterday's post to check out the other tour participants' blogs today. The way this works is we're supposed to post on the subject at least once during the three days, and preferably on all three. Many only get around to one entry, though, so if you tried yesterday and found nothing, give it another shot. Of course, some put up multiple posts, as mentioned above, and you'll want to see the continuations.
Karen
Posted by Karen Hancock at 4:33 PM