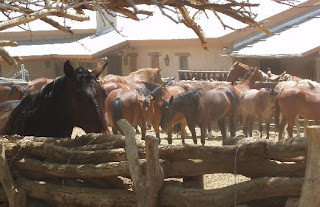 New sign in my office, courtesy of Bible Class:

The corrolary is that you can be productive without seeing a lot of action. I think I believe that especially when it comes to writing, and I am living by both the command and the corrolary. Oh and also "There's always time to do the Will of God."

The worst thing about breaking my ankle is not being able to drive. I don't really drive all that much, but what I've lost is the freedom to just go take care of something when I need to. Instead I have to arrange for people to take me. Today I had to go to the doctor's office, and my mother graciously agreed to drive me over and then we went to lunch. It was nice because it gave us some time together, but still. There is a loss of freedom.

Which, even though I said it was the worst thing, is probably not. I need to stay home and focus, stare out the window, blunder around, do nontops, etc., and the lack of ability to drive forces that. So even though I've just had several very busy days where I've been driven around doing things, before that I also had a lot of time to think. Which is what the books needs most, now, I think.

I have reached chapter 5 and realized I have to get my research institute settled. No longer can I put it off. The answers to the questions I must ask will determine too many things. The questions? What kinds of departments are there? How is it organized? What is Lacey's job profile? Who does she work for? These are the considerations that get skipped when you just sit down and start pounding out a story as it occurs to you.

Oh, and there's another, worse question, because it seriously affects my entire first scene, the start of the book, the plot, everything: why the heck does Cam have a lab on the animal quarters floor? Of course, it might not be a lab, it might be an office. But why would he have one of those there? And if he has neither, then why was he there on the night of that scene? Wait... I think I might have just thought of an answer...

My ankle isn't giving me a lot of pain. I'm not even wearing the boot much around the house. I can walk on it without the boot and without much pain -- though it'll start to throb if I get carried away. I do have to keep it elevated and that's a problem sitting at the computer. So I've been doing a lot of work in the bedroom... Researching Ziggurats, the Biosphere 2 operation back in the 90s and Greek Mythology.

And doing a lot of thinking, especially about how blessed I am.

Posted by Karen Hancock at 9:35 PM