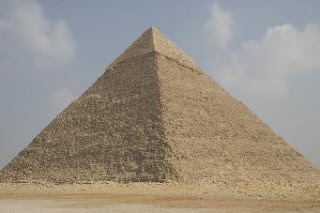 Yesterday I wrote about how no work of man lasts forever save what Jesus did on the cross.

Now called the Seven Wonders of the Ancient World, they are, in chronological order...

The Great Pyramid of Giza in Memphis Egypt, tomb of the Pharoah Khufu (see photo above) This was built around 2650-2500 BC

The Statue of Zeus at Olympia -- a statue of gold and ivory forty feet tall housed in a temple (amusingly, the sculptor Pheidias, had to contend with critics. They disliked that he'd sculpted Zeus seated with his head so close to the roof because it gave "the impression that if Zeus moved to stand up he would unroof the temple.")

The Temple of Artimis at Ephesus - renowned as the most beautiful structure on earth, built to honor the Greek goddess of hunting, wild nature, and fertility

The Mausoleum at Halicarnassus -- a wonder of architecture and sculpture in Bodrum, Turkey

The Colossus of Rhodes -- a 100 foot tall statue of the Greek God Helios made of iron and bronze (about 3/4's the height of the Statue of Liberty) and once guarding the entrance to the harbor of the Greek island of Rhodes.

The Lighthouse of Alexandria -- A tower on the island of Pharos in Alexandria, Egypt. At 383 - 450 ft "it was among the tallest man-made structures on Earth for many centuries."

Ironically it's the oldest of them, the Great Pyramid of Giza,that still remains. The other six have been destroyed, all but one by earthquakes. The Temple of Artemis was destroyed by a fire.

To see some pictures and learn more about the old wonders, check out this page of paintings by Mario Larrinaga.

Have a great weekend
Karen

P.S. To see what the 7 New Wonders of the World are, click HERE.
Posted by Karen Hancock at 8:33 PM