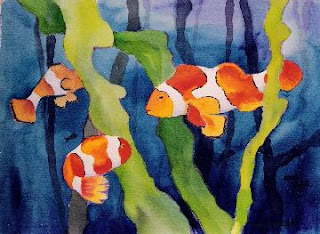 I finished chapter 6 of Black Box today! Hooray! And since I added a scene to the material I already had, I took half of the second scene in the chapter and put it into chapter 7. Which I'll start tomorrow. So once again I've experienced the phenomenon of the doors opening after a period of emptiness and frustration, and suddenly I have a chapter.

Yes, I did go over and over 6a, where first it was scattered and disjointed and full of questions, then slowly I moved different pieces around, and kept going through it, word by word it seemed. Then today when I did one more pass, I found myself rather pleased with how it was turning out. There are still many questions, both about it and about ch 5, details of the setting and the setup still need to be decided, but those, too are solidifying. Little by little.

So much of life, it seems, comes in small steps. Tiny changes that are nearly imperceptible. The growth of a book. The growth of a child. Spiritual growth is like that, too. We take in the word every day from our pastor and slowly the changes are wrought in our souls. Old ideas are challenged, often repeatedly until they are shaken free. New ideas take shape and are also repeated. Each time you hear it, the concept acquires more weight and substance, begins to link to other concepts...filling holes vacated by the old wrong notiong. And then there is the matter of application.

Another incremental process. I remember my problems with temper. First I would blow up and only afterward, maybe half an hour later, realize I was sinning and out of fellowship. Even then it might take me awhile to get to the point where I could really confess it -- rebound, we like to call it -- and leave it alone without taking up the anger again. Gradually I began to catch myself sooner and sooner after the blowup.

One day I realized in the middle of the argument that I was totally out of line, and just shut up. I was still angry, but at least I didn't have to add angry words to my already out of whack mental attitude. From there I moved to the point of becoming aware of the fact that I was reacting to something, and to cut it off right then, removing myself from the conversation before it could devolve into an argument.

The most startling event however, was the day when something was said and I just thought, "That's foolish talk. I don't even care about arguing over it." And then I thought, "WHERE did that come from?!" Because it sure wasn't me.

No, it was the mind of Christ very slowly taking shape in me. In that area, at least.

Those little things, we are not supposed to take lightly. The minutes of our days, the days of our lives. All numbered. All precious. Filled with small things, yes, but life is much more about the small things than it is the large ones.