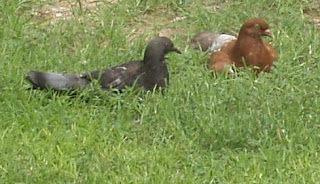 We used to keep homing pigeons, and though we got rid of all of our birds years ago, there are still pigeons who come and hang out near the water tub in our back yard. Sometimes they settle into the grass and just rest in the sun.


The picture above is evocative of my life this summer, though even last spring there were already glimmers of the thought changes to come showing up in Bible class and in my journals. It was sometime in April when I was reading about Noah and contemplating the unlimited atonement of Jesus' work on the Cross. Both pointed to the fact that part of the process of being conformed to the image of Christ is that we learn, and are transformed into being able to do things with full effort without regard for the outcome. Without the need for the world's or people's positive feedback, or any feedback. Without the expectation of it, in fact.

Noah preached for 120 years and had no converts. He made no discernible difference in his world, and yet he was glorifying God in a magnificent way, demonstrating the patience and grace of God with every word and with every new year that passed with those people who cared nothing about what he said continuing to live and pursue their wickedness. Jesus hung on the cross for six hours, swathed in darkness for three of them while he bore, willingly, the sins of all the people who have ever lived and ever will, so they might not perish but come to change their minds about Him.

The vast majority did not and will not change their minds, and as we've learned lately from a study of the divine decrees, He knew in eternity past they would not, yet decided to die for them anyway. "Anyway" is the wrong word. Because dying for those who would refuse to respond is part of the point. Yes, His work was to to save those who would believe in Him, but the fact that He provided the same work, the same opportunity to those who would not, speaks of the importance of the free will of men -- our capacity to choose -- and God's incredible graciousness toward us. The only reason any creature ever ends up in hell is by his own choice, not by any lack of desire or provision on God's part.

God has run these truths through my thoughts, through Bible class, and through my life for the past five and a half months. This time of quietness, when I've been able to do so little, has drawn my attention to a long held-motivation I've come to see as wrong: the motivation to produce and to accomplish for the sake of what that gives me. This too, I've written about before, but the glimpses are getting clearer, and the conviction of its wrongness greater.

There is the satisfaction of feeling good about myself because of what I have done -- when I am in reality but an unworthy slave who has done only what is required of her. This is the arrogance of achievement, when there is no achievement we can really do that the Lord does not provide or enable.

On the flip side, there is the guilt that comes in when my accomplishment doesn't meet my goals, the subtle impatience that simmers behind the scenes as I try to get each thing done only so I can go on to the next, the frustration and sense of loss and even purposeless when the accomplishments seem to have no effect on anything -- or at least not the effect I'd hoped. Arrogance, guilt, impatience, frustration -- those are all sins.

And a sense of purposeless is unfounded and flies in the face of what the Word of God teaches. For we were created with great purpose: to bring glory and pleasure to God. Not by our actions, or our striving, but in receiving with joy all that He wants to give to us. All that He has already given us. To relax and let life come to us, knowing He has all under control. To think His thoughts, rather than human/worldly thoughts. To confess our sins (rebound!) . To recall we've been bought with a price and that we are even now perfect in His eyes and that our experiential sanctification is something He does, not something we have to strive after...

It's more, even, than that, though. It's a paradigm shift in my thinking, not happening all at once, but day by day, and it's hard to articulate. Even with all the words I've set down here, I feel as if I've not yet come to the core of it. And probably won't for a time. All I know is, I'm finding a greater peace than I ever have before. Things I used to care about, I don't any more. He's got it all under control. Whatever He has planned, He is doing, not me. Like the pigeons, my soul can settle into the grass and rest in the sun, confident that whatever lies ahead He has already thoroughly provided for it. It's His plan, all the way. Not mine.