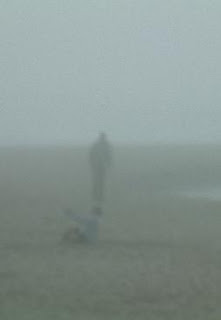 Last year (2006) when we went to the Oregon conference, we took a trip to the beach, which was very different from the one we took this year. Then it was cold, windy, so misty it fogged your glasses. We left much sooner than we expected because everyone was freezing. But one of us managed to catch this picture of Sasquatch!

Well... maybe not. But we were in the Pacific Northwest.

I've followed the Sasquatch saga off and on since I was a teen and the film footage captured by Roger Patterson on October 20th, 1967, of a bigfoot in Northern California had just come out. I went through a period of being intensely interested in all things weird -- UFO's, the Loch Ness Monster, Sasquatch and Yeti.

On the one hand I think maybe they do exist. The habitat they are said to live in is rugged and remote for the most part. And it's not as if they're never seen, just not seen at the right time to prove their existence. And proving their existence would only come through actually capturing or killing one of them. If they are as smart as some suggest, maybe this would be difficult enough that it's not happened yet.

Anyway, I like the idea that they're out there, and while I think Patterson's footage doesn't look very realistic, despite the claims of some "experts" that it does (there's no zipper, they couldn't have made a costume like that in those days and some people claim to see muscle movement), the legend is fun to contemplate. For example, maybe they're descended from the Nephilim!

Okay, true, we have no record of Nephilim being hairy and living like animals, but ... perhaps it's a result of inbreeding! LOL.

If you want to see stills from the footage and maybe read a little bit (or a whole lot) about the Bigfoot case, check out the Crypto-Bipedal-Primatology website, which offers a "Study of Unclassified Bipedal Primates: SASQUATCH"

It think the thing that I find most interesting is the whole attempt to prove it's true, when proponents really don't have the one thing that would nail it all down: a body. Which, of course, doesn't mean it's not true. We only just got actual footage of a giant squid in action, so it's possible -- likely -- there's still quite a bit about the world and its creatures we don't know.

Have fun!
Karen
Posted by Karen Hancock at 7:48 PM