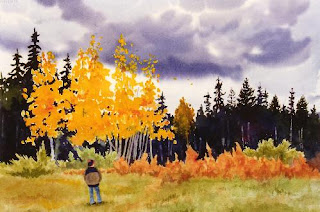 Where did the weekend go? I spent the day, after church anyway, finishing up my autumn cards and now I'm tired. So that makes it a great time to put up a picture of fall. This is one of my watercolors, done from a picture of my son on a camping trip to the White Mountains. Every year in October we would take my mother, sister, Adam's friend Ben and our dog/s and head up to Northern Arizona for 4 days of camping and to enjoy the aspen.

This picture was taken when we were still going to the Double Cienega area, near Hannagan's Meadow. The moutains were ablaze with the yellow aspen. We used to hike through groves of aspen where the leaves would fall around us like rain and turn the light all yellow. It was magical.

Which is no doubt why there's a scene in The Shadow Within that came directly from those experiences. On p 261, where Carissa is on her way south from Highmount Holding, her party has stopped at Owl Creek to drink and refill their waterbags. As she is standing beside the stream, Elayne assures her that Eidon will make them a way, despite the dangers they face.

At that, a puff of wind coursed down the rocky streambed, rustling the evergreens and showering them in fluttering gold leaves shaken loose from the aspen on the riverbank behind them. The world turned briefly golden, and for the first time in days Carissa felt that sense of promise she'd known so briefly back in Highmount, as sure and compelling as it had been that night...

I always look back on those times at this season. The blue sky, the chill air, the campfire. The cattle in the fields, the elk bugling in the night. One time, Bear's first in fact, it snowed and we had to stay in a motel. Another time the snow was so bad we kept driving to the next town and the next town to find a place to stay indoors and ended up driving a giant loop around the state and home again within a day.

We won't be taking any of those trips this year, I'm afraid. I have a book to finish! And today the Lord informed me that it's time to rev up my rate of working. I am going to try to go from two hours of 100% concentration/sacred time to four hours. This morning, for the very first time since I started writing this book, I woke up thinking about it. That's an excellent sign that things are starting -- finally! -- to percolate.