He Doesn't Realize He's Only a Dog 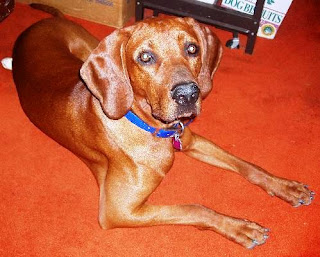 Yes, Quigley is finally all better. He got us up Friday morning at 3 am, again, with squirting stools, again, and my husband decided we should take him to the vet. Since I had to take my mother to see her radiation oncologist that same day, I knew the only way I was going to fulfill that obligation and get the dog seen, was if the Lord worked it out. So I gave it to him (after some silly, angsty ruminations at 3:30 in the morning) and at 8am called the clinic. After describing the situation to the receptionist, she said they would have to get him in that day.

So we saw the vet and I took my mother to her doctor's appointment. At the vet, I learned that Quigley weighs at least 73 pounds and is not yet done growing. He's going to get bigger, broader and stronger.

I also learned that he is a very unusual dog with unusually dominant traits. As in, maybe we should work with a trainer. (I'm thinking, yes, we need to run him through an obedience class... or rather, I do, and I don't have the time right now. I have a book to finish!!) (And trigger finger which means no gripping strength in my right hand). He is a handful, she confirmed.

Indeed. When we arrived, after weighing him, they brought us to a large room with a bench in one corner and counter with computer on it in another and nothing else in the room. The walls had chest high wainscoting on them, and above that were various framed pictures. There was also a little dog's-hind-end hook by the door where you could hang leashes on the upraised tail. Well, after smelling the entire floor thoroughly, Quigley decided he needed to examine the artwork, up on his hind legs to get a closer look at every one of the photos and especially the dog bottom hook. When the animal technican came in, of course she was rudely mobbed. When the vet came in a similar interaction ensued.

Sigh. I felt like a helpless mom with a total brat. Of course that's what I have. And ADHD doggy who just gets completely out of control when he gets excited. He's not that bad at home with us, but he's still a pain with other people.

So, while I felt a bit embarrassed by my overbearing pooch, I also felt vindicated. He is weird, he is difficult, he is very strong, very intense... I'm not making it up! (Stu says he doesn't realize he's only a dog!)

Even better, they discovered that whatever had caused the original diarrhea, mostly likely something weird he'd eaten, that was no longer a problem but he did have a secondary infection caused by the diarrhea itself. She gave us a tube of Fast Balance-GI for dogs and horses. I was to give him two doses a day for two days. By Friday night we were already seeing some improvement. By Sunday night he was completely normal.

She told me I didn't need to do all that rice and chicken stuff. Hallelujah! No more cooking rice! No more cleaning dishes, and going to the store for more rice and more chicken. No more wondering if I should be feeding him more chicken, or more rice, or more kibble. Was I causing this problem? No. It was an overgrowth of normal intestinal bacteria. For which he's still taking pills, but beyond that, all has returned to normal.

So that's over for now. But I want to see if I can get some of the Fast Balance stuff to have on hand for the next time. I'm sure there'll be a next time. Quigley is incredibly indiscrete when it comes to his dining choices.

I've also made some very decent progress on The Enclave. Not so much in pages/chapters (though I am currently working on ch 12) as in conception, characterization and plot coming together to make something I'm actually starting to like. Of course, I finally started praying that the Lord would either give me something to like in the story, or show me what's there that I can like. It's nice to finally be getting a bit excited about it.

I've been holding more or less to my two hours of sacred time, though when I overslept this morning, that messed me up a bit. More from the standpoint of me telling myself it didn't matter if I started late because I got up late. Except that after I let myself get away with that, I wasn't very happy and realized that I wouldn't do that with a doctor's appointment, so why was I doing that with this. What didn't I understand about "sacred" time? But you have to go through these things to really get them cemented and I like this plan.

Speaking of, I'd best get to bed so I don't oversleep again.