The Enclave - A Review 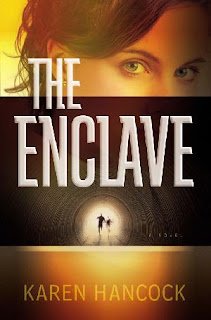 The Enclave received its first review on Monday, from Publisher's Weekly. This is a big deal, I guess. I'm not exactly sure why, because I don't think many readers read Publisher's Weekly, or PW as it's known. But I guess booksellers do and reviewers and such, so if your book gets reviewed -- well or poorly -- it's regarded as a good thing. Arena's mostly favorable review in PW prompted Bethany House to ask if I had any more books in the works and led to them buying the Legends of the Guardian King series before Arena itself had ever even released to the general public.

The Enclave's review, alas, was mostly negative, as you can see:

Hancock has cleaned up at the Christy Awards for excellence in Christian fiction with four previous visionary novels (most recently, Shadow over Kiriath), but this one falls short. Researcher Lacey McHenry has a lowly position at the cutting edge Kendall-Jakes Longevity Institute, where a peculiar intruder sets off a complex chain of events that draws together McHenry and researcher Cameron Reinhardt— a man with a powder keg of a past—as the two try to solve the riddles that keep cropping up in their workplace. Hancock has a plot so complicated that a lot of elements are unsatisfactorily resolved or are simple red herrings: Lacey’s abusive ex-husband, a host of intriguing but underdeveloped secondary characters, military action in Afghanistan that is part of Reinhardt’s past. Narrative energy instead goes to didacticism: Reinhardt, an evangelical Christian, argues with his fellow scientists about evolution in an episode that’s more polemic than dramatic. Visionary fiction is a narrow niche, and the Christian biblical literalism driving key action in the plot won’t do much to enlarge the audience. (July)"

I had to look up "didacticism" and "polemic." Though I had a general idea what they meant, I wasn't sure in the specific. Didacticism means "the instructional quality of something, such as a piece of writing," which I'm not sure is a bad thing, really. Not that I ever sit down intending to instruct my readers. I mostly try to express the thoughts of my characters as they come to me...

Polemic means "containing or expressing passionate and strongly worded argument against or in favor of somebody or something." Its usage in the review I found simply odd, since the only people who were fired up in that relatively brief scene between Reinhardt and his fellow scientists, were the fellow scientists. Reinhardt was nervous and distracted... So I'm not sure where that comment is coming from.

But then the PW reviewer of Arena worried that the book's "many rapes" and "occasional stomach turning descriptions" (one, which was provided there in the review) were going to put off Christian readers. It took me some time to figure out they meant the rapes of secondary characters which happened offstage, far from the protagonist in place and time...

I hesitated in posting this. What if it makes readers of my blog leery of reading the book? At the same time, I'm kind of amazed at how much it's not bothering me. It has, however, prompted a couple of lines of thought, which I'll pursue tomorrow and next week.

That last line about "the Christian biblical literalism driving key action in the plot" not building the audience for visionary fiction (or, assumedly, for The Enclave) was of particular interest, especially after I looked up "Biblical Literalism." But more on that tomorrow.