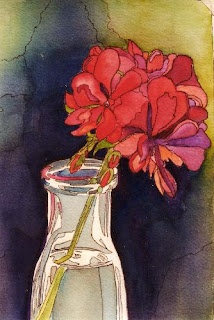 Well, finally I've come to the end of the words that reading Fossil Hunter inspired in me. It's been an interesting journey.

In the course of looking up sources and answering some email questions, I learned that it's not that the Young Earth creationists (those who believe that there was no sin before Adam and the earth and heavens were created, rather than renovated, in the six days of Genesis) don't know about the Gap between verse 1 and verse 2, it's that they don't agree with it.

In fact, someone sent me a link to a guy giving a presentation on Young Earth creationism who early on in his talk just threw the Gap "theory" out the window as both "unscriptural and unscientific." Having spent the morning going through all the scriptures in support of the notion of a Gap of time between "In the beginning, God created the heavens and the earth" and "And the earth was formless and void" and thus more convinced than ever that it is the only thing that makes sense of the different verses, I was not impressed. And even annoyed. I didn't like his tone either. And hey, I don't have a lot of time so I decided to turn him off right then. Maybe I'll listen later, because apparently he does have some interesting things to say.

Curiosity sent me Googling him, and then the Gap Theory, the latter quite interesting. For one, I had no idea that us Gap Theorists' main reason for supporting it is because science says the earth is old and we are trying to make the Bible fit with what science said. I also didn't know that it was, in the 19th and early 20th centuries a very common interpretation of Genesis and prehistoric events. Even more interesting was the fact that the Wikipedia article cited Donald Barnhouse, C.I. Scofield and Lewis Sperry Chafer as its chief proponents -- all of whom were also proponents of Dispensations.

But then those two subjects do intersect quite closely. Anyway, from there I went on to Answers in Genesis, a website that purports to explain beginnings and is very disparaging of the Gap theory. I read a bit of that, but found their objections to be based on faulty premise after faulty premise that eventually I just gave up on that as well. When someone starts out with their very first objection and you don't agree with the first sentence they write... you're in trouble.

Anyway, I might do a blog post or two on it, if the Lord leads in that direction. But not tonight...

It's been a busy week. I've taken my mother to doctor's appointments for three mornings straight. And I've been focusing on getting home tasks done as a priority -- back to using Flylady's system, more or less. Mending things, cleaning out the refrigerator, taking my wedding ring to get the prongs put back in place so I can wear it again, starting back up at the Y, washing mini blinds and trimming the edges of the grass...

I've been reading another book, too: The Hunt for Bin Laden by Robin Moore. This one's nonfiction, about the the invasion of Afghanistan right after 911. That's been very interesting.

So tomorrow our three-day weekend begins. Hope yours is a good one! And Happy Mother's Day to all my readers who are Moms!