Me and Dean Koontz 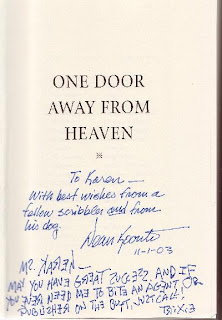 As I mentioned in a post back in 2007, the only published author I ever wrote a fan letter to was Dean Koontz. I may have told bits and pieces of this story over time, but today I'll put it all together. I can't recall when I first read his book Watchers. It was probably a good twenty-five years ago. I loved it. I was amazed by it. I immediately began reading others of his books, including his Writer's Digest book, How to Write Best-Selling Fiction, now out of print. (Or maybe I read that first, seeing as my Berkeley edition of Watchers is dated 1988, whereas my Writer's Digest edition of HTW Best-selling Fiction is 1981) Anyway, my copy of the latter is highlighted and worn. It became my central text on learning to write, and his books my illustrations.

Later, I used several of his openings as comparisons with my own (an unpublished opening for The Light of Eidon), in a process I describe in an article on my website entitled "Mentoring without Meeting." I pulled out the first paragraphs and set them side by side, examining and comparing each sentence to see what his did in comparison to mine did. I learned a lot from that and I've now
read at least 32 of his books.

Thus, when The Light of Eidon came out, I marshaled my courage and sent him a copy of it along with a letter explaining my indebtedness to him and my appreciation for his work. I figured he surely didn't have time to look at reader mail, let alone read the published book of some fan, but you never know and possibly one of those staff members might read Eidon, even if Koontz did not. I have no idea if he read it -- mostly likely not -- but a month or so later I received a box from him, containing two hardcover books autographed to me (see the pic above for one example) from him and Trixie, his dog, since I'd mentioned myself as a longtime dog lover.

There was also a wonderful personal letter from Mr. Koontz, along with the form letter that usually goes out and a copy of his newsletter, Useless News which was quite funny as well as being enlightening and encouraging. (I'm still on the mailing list, just as the newsletter warned: "...you're on our mailing list , and there's nowhere to hide." So I'm doomed forever to receive Useless News! Fortunately I enjoy them immensely.) I was overwhelmed with his graciousness and his generosity.

The first of the books that he sent me was From the Corner of His Eye (2000), which I finally got around to reading in June of 2007 and blogged about in the same post I mentioned above.

The second was One Door Away From Heaven (2001), which I finally read last week and will blog about tomorrow. As I mentioned the other day, my thoughts about it, on balance were not positive, but that's not because of anything regarding the writing, the characters, the plot (I read it in less than a week, after all, and it's a 607 page book) but rather because my theological/doctrinal viewpoint clashed strongly with the viewpoint he was putting forth in the book. A clash that many in the world would probably find surprising...

But more on that tomorrow...