One Door Away From Heaven 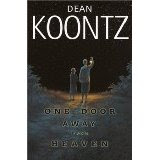 I said Wednesday I would blog on my thoughts about One Door Away From Heaven by Dean Koontz, one of the two books he graciously autographed to me. Because he did autograph it, I felt that I should only have good things to say about it. And mostly I do. But there was an element -- the theme -- that greatly annoyed me. In fact I was all ready to write about that and then went to Amazon to check out what other reviewers had to say and...

That was most beneficial, both in instructing me not to take those reviews at all seriously (some people do not seem to actually know how to read, given the things they see or don't see in a book) and in getting me to take another look at my reaction, which overall was far more positive than that of the people grousing at Amazon. (The teacher of English was especially out to lunch, giving the book one star, railing at it for its horrible writing and its terrible use of metaphor. And even transcribing one of his horrible sentences, which was -- Heaven forbid! -- 84 words long! Horrors! How can this be?! She would have given his work an F were he in her class.)

What's funny about this is that he doesn't have a lot of respect for English teachers and their effects on those with a talent for creative writing, and he devotes a fair amount of discussion to this in his How to Write Best-selling Fiction. In his opinion they don't have the first idea what writing fiction is about and generally will squelch and derail any creative impulses on the part of their students should they happen to manifest.

It's also funny because I seem to recall from one of William Faulkner's novels a sentence that went on unobstructed for over a page, but none of my English teachers were calling him a horrible writer for doing this. So not only does Koontz not have the corner on long sentences, his being maligned for it is inconsistent with what English teachers accept from someone else, now dead and held as a Great Writer.

Finally, it's funny because in HTWBSF, Koontz also discusses his penchant for experimenting with form and technique to get the best effect for what he is trying to convey in a book. That's why he chose to use the present tense for one of his points of view in this story (which appalled the teacher) (though it's not the first book by any means where he's done it) and why he chose to create a sentence 84 words long. I believe he was in that sentence trying to convey a smoothness of chaotic motion. The words and their form mimic the image he is communicating and I think he did a good job.

So, having read some of the reviews, instead of complaining about the theme, I end up defending him! LOL.

Despite my complaint, I did not find this book boring at all, nor did I find the writing tiresome, or the metaphors overdone. I enjoyed most of them. For example (relating to a brewing storm):

As dark as iron in places, the sky at last grew heavy enough to press an anxious breath from the still afternoon. The pleasantly warm day began to cool. All around Micky, trees shivered and whispered to the wind.

Birds like black arrows, singly and in volleys, returned to their quivers in the pine branches, with flap and flutter, vanishing among the layered boughs: a reliable prediction that the storm would soon break.

The first bolt of lightning, thrown open with a crash, had not unlocked the rain. The longer part of a minute passed before another bolt, brighter than the first, slammed out of the hasp of the heavens and opened a door in the storm.

Scattered drops of rain, as fat as grapes, snapped into the oiled lane that served the many campsites, striking with such force that sprays of smaller droplets bounced a foot high from each point of impact.

I also liked the characters, and unlike some (was it that teacher again?) did not find them unbelievable at all (especially since I am now reading Hollywood Interrupted, which examines the behind-the-scenes lives and culture of the elites of the entertainment industry; some of those people are VERY much like Koontz's villains here). I'm always amazed at how he creates likable, believable, flawed but very quirky -- and thus interesting -- characters. They can have somewhat lengthy conversations that remain amusing and interesting and just pull you easily through them.

His openings are always immediately gripping. Here's One Door's:

Currently, sunshine was Micky Bellsong's medication of choice, and southern California in late August was an apothecary with a deep supply of this prescription.

Another metaphor there, which I also enjoyed. That first line is also part of the book's theme, which concerns what actually will heal those broken people. Of course, as a believer in Jesus Christ, I know the answer. I know the man, the One True Healer. It's only through believing in Him that anyone can be "healed."

This was not Koontz's answer however, which is hardly surprising. And because it is not, as you have probably guessed, that is partly what annoyed me. The other part of what annoyed me is that he presented his faulty solution so darned well. It seems so good, so nice, so "true" from the human perspective. The words, the story, the characters all work together to make you feel so good about it, when it is a lie. In fact, it is the worst kind of lie and the worst kind of evil. For how great is your darkness when you believe you are in the light?

I find it ironic that the Publisher's Weekly review of this book, which was on the whole favorable, concluded with this statement:

"For all that, the novel is surprisingly focused on its inspirational message "we are the instruments of one another's salvation and only by the hope that we give to others do we lift ourselves out of the darkness into light" and conveys it with such conviction that only the most critical will demur."

So that makes me one of the minority "most critical," but yes, I do indeed demur ("to object mildly to something") (what is it about PW that I keep having to look up the words they use in their reviews?) Except I don't object mildly. I strongly and strenuously object. In fact, it makes me want to gag. But I'll save that for my next post.