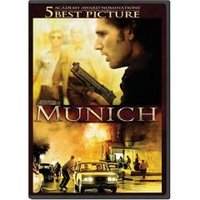 Last Friday we rented Steven Spielberg's Munich -- about the secret Israeli squad assigned to track down and assassinate the 11 Palestinians believed to have planned the 1972 Munich massacre of 11 Israeli athletes, and the personal toll it takes on the man who led it. It was nominated for 5 Academy Awards, including best picture.

I can't exactly say it was good, or that I liked it -- it's not the sort of film that leaves you aglow with triumph -- but it was definitely worth watching. I was in college at the time the event took place, and recall it only vaguely, so it was interesting to see that recapped along with what I took to be actual footage from the news media.

I loved Eric Bana as Hector in Troy and I liked him a lot here as the team leader. His transformation from young, naive neophyte to hardened field operative is fascinating and heart-wrenching as he tries to carry out what he sees as his patriotic duty at considerable personal sacrifice. And that amidst recurring doubts as to whether what he is doing is really right. In fact, the movie itself deliberately calls into question the legitimacy of the whole operation, and makes an effort to portray both sides, Palestinians and Jews, as having equally valid claims/desires and grievances -- without really offering any conclusion. Of course, with the Word of God in the picture, the answer is clear: the Jews win; they get the land in the end. But that goes beyond the scope or intention of this film. I think it was mostly to shine a light on the complexities of the situation and the misery caused to all parties involved.

In all it was quite thought provoking, though I wonder how much of its meaning was created by the lens through which the director/writer chose to show things. It's not a documentary, after all, only "inspired" by real events. The truth could be much different.

It is not for the kiddies by any means and well earns its R rating with graphic violence, sexual content (the man and his wife), nudity, and bad language (though I don't think there was all that much of that. I can recall only a few, isolated incidents).

Karen
Posted by Karen Hancock at 6:39 AM