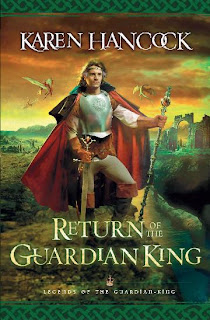 Monday (or today, depending on when you are reading this) marks the first day of the April Christian Science Fiction and Fantasy (CSFF) Blog Tour featuring the final volume in my Legends of the Guardian-King Series, Return of the Guardian King.

I have done interviews for both Chris Deanne's and Shannon McNear's blogs, and those should be up, if not Monday, then sometime during the tour. Check out other participants for reviews, commentary and discussion. Shannon is heading up the tour, so you can start with her blog for a list of participants or scroll on down for the list here.

It's an amazing thing for me to see this book released and in print. As I mentioned in the interview on Chris's blog, when I arrived at Mt. Hermon with Arena in proposal form in 1999, no one was doing fantasy. In fact, I was told that fantasy was a bad word and shouldn't even be used. The moment you said you were doing fantasy, you would immediately be compared to Tolkien or Eddings and no one can stand up to that. So, as I think some of you know, I called it "Speculative Historical Fiction."

When I sat at the tables with various editors and agents and it was my turn to say what I was writing, some of them literally shrank away. The lights went off, the shades were drawn and they went quickly on to the next person. Several editors were kinder -- they told me that they themselves loved the genre, but they'd never be able to get it past their editorial board. The result was the same... on to the next person

When Bethany House did buy the Guardian-King series -- solely on the basis of the reviews for Arena, not on any hard sales figures at that point -- they gave me a descending advance structure as I've mentioned. The signing advance for Return of the Guardian King was about 10% of the total advance, which was a pretty good indication the publishers thought it might not ever leave the nest. I'm so glad the Lord has seen fit to allow it to do just that.

In celebration of RotGK's release, the completion of the series, and of this blog tour, I'm holding a giveaway drawing. If you would like to be in the drawing for a complete autographed set of Legends of the Guardian-King, please leave a comment for me today through Wednesday saying so. I'll choose from the entrants' names Wednesday evening and post the winner Thursday. You only need to leave one comment telling me you want to be in the drawing. If Blogger won't let you comment, you can send me an email through the address given in the profile. Be sure you put something like Blog giveaway in the subject line so it won't get lost in the junk mail.

Coming tomorrow -- highlights of the tour and part one of my two part article, "Making the Invisible Visible."

Here are the other participants (If you checked earlier, links have been fixed now; sorry about that):