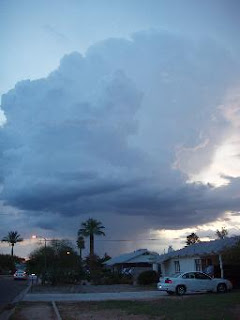 All the highs and lows and moisture pulls have lined up and our monsoon is now in full swing. We had a huge storm last night (Saturday). The wind was blowing like crazy and the rain was coming down fast. They said our area got 1.23 inches in twenty minutes. "Coming down" is a bit of a misnomer, though, since the rain was blowing horizontally. I'd have taken a picture but all the windows were streaming with water and the visibility wasn't too great even apart from that. The back and front yards became lakes and the street was a river.

My husband was flying in from LA, due to arrive at 8pm with the storm in progress at our place at 7:45 and moving directly for the airport. Our county was under a severe thunderstorm watch, and also an urban and small stream flooding advisory. As it turned out, the plane was diverted to a holding pattern over the Tucson Mountains to the west and didn't land for half an hour. When my husband finally got on the ground and back in the car -- all the power was out. That means there were no stoplights, and not enough police to cover them all.

He had thought to stop at a fast food place to pick up dinner on the way home, but all the places he'd had in mind were dark and powerless. Finally he found an El Paso, northeast of our house and got carry-out. Turns out about 18,000 customers lost power in the storm. Our house seemed to be part of an island where the power had not been knocked out. Most likely because I was in the middle of listening to Bible class when the storm hit. LOL!

PS. The picture is from today, not part of the storm on Saturday.
Posted by Karen Hancock at 9:40 PM