Rainbow After the Storm 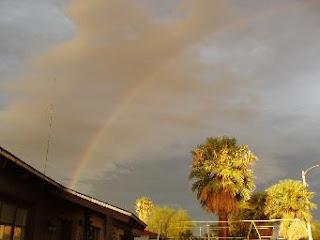 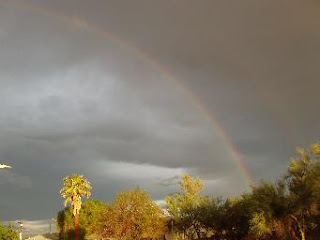 Tuesday night we had another big storm. It blew threw around five pm while we were doing Bible Class. About twenty minutes into class, lightning struck close and loud and the power went off. By then the wind was blowing like crazy (60mph gusts, they said) and the rain was pouring down along with marble-sized hail that was battering all the front windows of the house so hard I thought it might break them. We went out into the dining room to discover that the car canopy had within ten minutes been totally shredded!

Wow. I love these storms! They are amazing.

In half an hour it was over, but the power didn't come on for three and a half more hours. I was amused to find how much of a hole no power makes in one's life. Suddenly all the things you were thinking of doing that night... you can't. And furthermore, everything you think of doing now, with the power off, you realize you can't do! (Which is why I had no post for Tuesday.)

At first I went outside where it was still light, and also cool, fresh and still sprinkling. I wrote in my journal for awhile as the rain stopped and that's I saw the rainbow (above) -- it was a full rainbow arcing over our street, so perfectly the street seemed to be heading straight into it. Unfortunately I couldn't get both the street and the rainbow in the camera's viewfinder, so I opted for the rainbow and took two pictures (see above) You can see the light pole on the right side of the left picture and it's light fixture protruding from the left side of the right picture. Pretty cool.

Later, when it got dark, I went inside and listened to Bible class on my Mp3 player, and realized... I can't cook my dinner! The microwave doesn't work. LOL. We are SOOO spoiled! Anyway, I put on a headlamp, ate peanut butter and jelly and started reading Michael Crichton's State of Fear, which is partly relaxation and partly research.

Speaking of, I've gotten stuck on the second scene in Chapter 7, working my way through it very slowly. Today everything just went blank, so finally I gave up and did other things... Maybe tomorrow I'll move it to the point I can at least leave it. Crichton's book is actually quite timely in its descriptions of a couple of things.

Posted by Karen Hancock at 9:25 PM