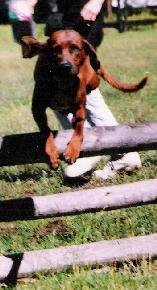 We're gearing up for another trip. And so of course the dog has begun to have problems. Bear is our 11-going-on-12 year old Redbone Coonhound and my writing buddy. He's lying beside me as I type this, in fact. My getting published has been very hard on the guy. Until then he was a strong, quick, healthy athletic dog. The soundest dog we've ever had. But for four years now, every time I have a deadline, or get ready to take any kind of trip, suddenly he is beset with some new and mysterious ailment. These include several different bouts of tick fever, never officially diagnosed but always resolved by the treatment for tick fever, hot spots, allergic rash all over his ears which showed up when we were away from home, an aural hematoma, vestibular something or other -- an inner ear malfunction that upsets balance -- and chronic kidney failure, which started last summer and is ongoing.

Last weekend he developed a minor problem with incontinence owing to his age and some of the problems of kidney failure, and the standard medication for that ailment was prescribed. Two days later he started to have increasing tremors. Since he lies beside me while I'm working and tends to follow me around through the house he was always right there where I could see the tremors. He staggered and wobbled when he walked, or suddenly got up, only to stand there staring at the floor, twitching and trembling.

I'm the kind of person that can't stand not knowing what is going on (probably why the Lord puts me in so many situations where not only do I not know but I can't seem to find out) and so I went to the Internet, searching for side effects to the drug, and for information on tremors. Nothing to indicate the problem should be from the drug, so the next day I gave him another pill... and he seemed to get worse. Long story short, it was the medication. We took him off it and he's getting better. Still not hundred per cent but way better than two days ago.

You probably think with all that, I didn't get much work done this week, but I am a little amazed to report that I actually finished chapters 19 and 21 (I'll go back to do 20 once I'm done with 22). Given the level of distraction, I'm not sure how that happened. Grace of God, of course. Sometimes it's more obvious than others.