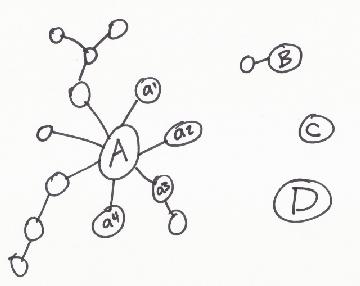 Having finished chapter 20 and 23 last weekend, I began to think about 24 on Monday. (Um... that would be Chapter 24, not the TV program, 24). That sent me back to chapters 4 and 9, and I've spent the last three days working through the process of drafting a new scene for 9b.

There's definitely a process. On the first day I had the turnip head again. Could not follow a thought line to save my life. Couldn't remember thoughts I'd had two minutes after I had them. Nothing happened. I took a nap.

The second day I began to get some ideas, but it was chaotic. None of them went with any of the others. A huge mass of ingredients but no recipe and at that point, no idea whether I was baking a cake or making stew. I had some more of the spacey head, where I couldn't remember thoughts I'd just had five minutes previously and nothing seemed to catch fire and go.

Then I thought of making a bubble outline. So I got out a big sketch pad and began to put all the different things I had thought of in bubbles, with related thoughts spoking off their respective bubbles to new bubbles. Soon I discovered that I had a definite cluster of bubbles in one area and that told me what my scene needed to be -- where, whom and generally what about.

Having decided that, I sat down to write it today and it all came out. Ten pages worth. Since this plotline was a big blank before, I am very happy that I now have a good and solid idea of what it's going to be about. I'm not sure yet whether I can go right to chapter 24, or whether I'll have to revisit another of the intervening scenes... tomorrow will tell.