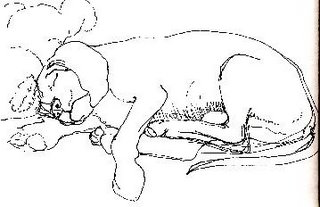 Yesterday I talked about how I had finally gotten the key to what I needed to do in Chapter 15 but had no time to implement. Well today I had time and began the day with visions of completing the chapter. Instead, I got completely hung up on how to get into it. I knew what I intended to do once I got it going, and I kept getting all kinds of good ideas for what was to come, but I couldn't figure out how to begin it.

I stared out the window. I walked around. I did nonstops by hand and then on the computer. I checked email a bunch of times. I did a lot of fooling around with Bear, but that's normal. I started to get frustrated and angsty and worried. So I sat down and confessed those sins. Prayed about it some more. About 3:30 the answers began to come.

The problem was, the last scene with Abramm has happened months previously to the one I'm working on now. If I were simply going to continue with the events that immediately followed that last scene it would have been easy. And I considered that: starting there and running forward narratively. But I don't have the space to do that, and I think that would be boring, anyway. Conclusion: the place where I thought the action should start is where I still think it should, and I'm just going to have to figure out a way to deliver the backstory as efficiently and interestingly as I can. And... silly me... that is ALWAYS difficult.

But at least I've gotten it started now, for which I am very grateful.

Okay, back to work!